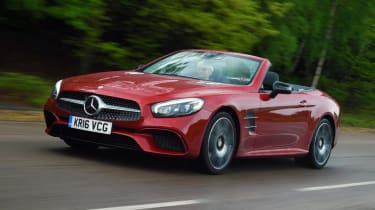 While this current Mercedes SL might not have the elegance of its predecessors, that doesn’t stop it from being a hugely desirable luxury cruiser. Despite its SL (Sport Leicht) tag, this is no sports car, although searing pace is available if you opt for one of the ferociously powerful AMG editions. You’ll struggle to use an AMG SL’s performance very often, but you do get a soundtrack that the more prosaic editions can’t match. The SL is a costly car to purchase new and, while it can represent superb value as a used buy, you can never expect to run one of these cars on a shoestring. And when buying you need to ensure that the previous owner hasn’t tried to do so.

Ever since the 300SL arrived in 1954, the pinnacle of the Mercedes two-seater range has been the SL. For 65 years there have been few rivals that can compete with its blend of glamour, build quality, performance and usability.

In that time, plenty of other two-seat convertibles have come and gone, but most have struggled to match the well rounded abilities of the SL – a car that can cross continents with ease, and which is packed with the latest comfort and safety tech.

The SL we cover here is the folding metal hard-top sixth-generation model, codenamed R231, and it’s the most impressive edition yet, with its lightweight aluminium bodyshell bringing greater agility and extra economy. 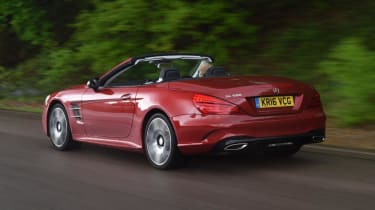 Upgrades for the SL 350 and SL 500 in June 2013 brought standard AMG Sport trim, which included an electric glass sunroof, Active Park Assist, stronger brakes and sportier styling for the cabin and exterior.

Six-cylinder cars (SL 350, SL 400) are all you need for smoothness and performance; the V8s offer stronger acceleration (all SLs are electronically limited to 155mph), but you’ll face higher fuel, maintenance, road tax and insurance costs. It’s better to buy the best six-cylinder car that you can find and afford, focusing on what options are fitted. 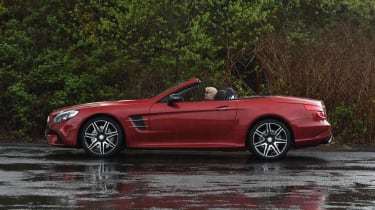 Alternatives to the Mercedes SL

The Mercedes is in a class of its own up to a point. The Jaguar F-Type is the nearest rival on paper, because it’s a similarly costly two-seat model with six or eight-cylinder engines, but it’s more sporting and comes as either a coupé or a soft-top cabriolet.

Porsche’s 911 has token rear seats and also comes in coupé or cabriolet forms; it’s a superb grand tourer but, again, it’s more sporting than the Mercedes. The Maserati GranCabrio and GranTurismo are two grand tourers with V8 engines and are worth considering for their looks alone.

The BMW 6 Series is another GT that is accomplished, fast, refined and great to drive, plus it’s unique in the segment because it’s available with diesel power.

The SL 400 and SL 500 both had a seven-speed transmission until March 2016, when they gained an extra two gears.

All SLs have an automatic gearbox which can lock itself in Park. Repairing this requires a new gear selector mechanism to be fitted.

The hard-top mechanism tends to be reliable most of the time, but the boot separator can work loose, jamming the roof.

The SL is strictly a two-seater, and by taking this approach, Mercedes hasn’t compromised front-seat space; there’s lots of room for the two people. The seats are fabulously supportive and comfortable, but be aware that big wheels and sports suspension can harm the ride. The hi-tech cabin is built to a superb standard and the boot can take 364 litres roof down, or 485 litres with the roof up. 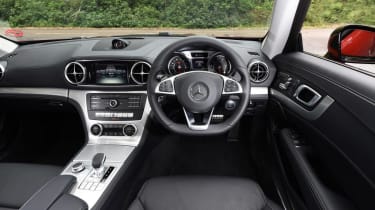 The SL needs to be serviced every 12 months or 10,000 miles, regardless of engine. Maintenance alternates between minor and major, with the former costing £264 to £300 depending on engine and mileage.

A major service can cost as little as £451, but can be as much as £908; this doesn’t include fresh brake fluid (£94), needed every two years. There’s no schedule to replace the coolant – it’s checked at each service and renewed when necessary – and because Mercedes engines are chain-driven, there are no cambelts to replace. This helps to trim running costs a little.

The SL has been recalled twice, first in August 2014 because the passenger airbag might not deploy properly in a collision; 712 SLs built from March to May 2014 were affected. Possible power-steering failure saw 14 cars – from the SL, C-Class and E-Class ranges – recalled in February 2017. Mercedes hasn’t released build dates for the affected cars, but dealers can tell you if the work was actioned if you give them a chassis number.

The SL has never appeared in our Driver Power surveys, but readers of sister title Carbuyer rate it 4.3 out of five on average, which is encouraging, yet this includes some previous-generation SLs. Build quality and reliability generally get a thumbs up, as do the Merc’s ability to cover big distances, the high-tech equipment, plus the levels of safety and comfort – just as you’d expect.