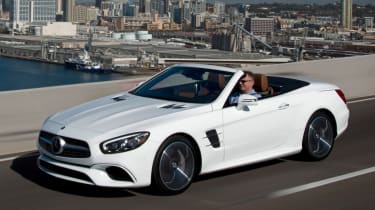 The updated SL is a well rounded and desirable car. Visual updates give it slightly more road presence, and the added performance makes it feel that little more eager throughout the rev range. It straddles the line between being a full-fat sports car and luxurious GT cruiser, which for some will be the best of both worlds. Many, however, will crave the sharpness delivered by rivals such as the Jaguar F-Type – especially when you consider even this entry-level car is more than £70,000.

Mercedes will be a very busy car company in 2016. The German manufacturer plans to launch upwards of 10 all-new or heavily revised models before the end of the year - and first out of the blocks is the facelifted SL. With such big plans, you might expect Mercedes to overtake BMW and Audi in the premium car sales charts.

The new SL isn't the most important model for Mercedes this year - we’ll leave that accolade to the new E-Class – but it’s significant nonetheless. The classy convertible now gets updated engines, new tech and a fresh look, not to mention some serious brake horsepower. 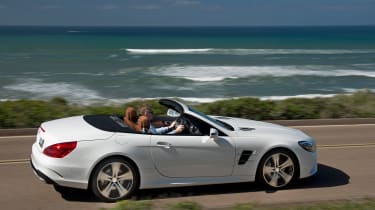 When the entry-level SL 400 kicks off at £73,805, the two-seat roadster clearly isn’t going to be the staple model in Mercedes’ portfolio; only 1,100 UK sales are targeted per year. This SL 400 is the biggest seller in the range, though, powered by an uprated 362bhp 3.0-litre twin-turbo V6 that now drives through a slick-shifting nine-speed automatic gearbox. Power is sent to the rear wheels only, and 0-62mph is achievable in 4.9 seconds. It’d be fair to say the basic sports car requirements are all present and correct, then – on paper, at least. 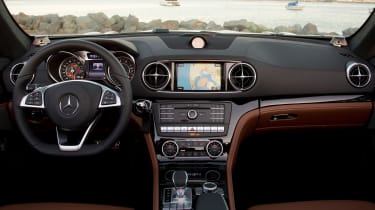 The SL 400 serves up all the pace and performance you’re ever likely to need, though. The addition of a new nine-speed automatic gearbox makes progress all the more effortless with smooth and accurate changes, and with 500Nm of torque available from only 2,000rpm, a jab at the throttle delivers a welcome surge of acceleration. Our test model came with optional Active Body Control suspension. It costs a considerable £3,080, but delivers a supremely supple and relaxed ride. Hit a pothole and the SL becomes a little flustered, but the roadster does well to disguise its size.

Dial the dynamic select control up to Sport mode and ask a little more of the SL, and it begins to expose its weaknesses. Its comfort-biased set-up is immediately evident, with light steering that feels overly elastic in Sport setting. That said, the car does respond faithfully to fast direction changes, and will corner with a suitable degree of precision. 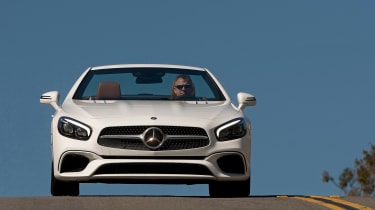 The Active Body Control system also comes with the new Curve Tilt function from Mercedes’ S-Class Coupe, leaning the car into bends to keep it flat. The SL’s body control feels better without it, though, as you can sense when the grip is loading up through corners more naturally.

While the gearbox is beautifully compliant when you’re taking it easy, it isn’t the most obedient unit when you want to swap ratios yourself. It’s reluctant to change down, and will upshift for you in manual mode when you edge closer to the rev limiter, which can result in frustrating double upshifts. If it’s driving involvement you’re searching for, the Jaguar F-Type Convertible is probably worth a look.

The SL is perfectly happy to be hustled along, but it works far better when you ease off a little. Roof-down, buffeting in the cabin is kept to a minimum and the smooth twin-turbo V6 emits a rich howl from the exhaust. 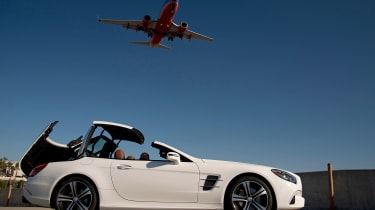 Taking it easy also enables you to appreciate the revamped interior, which comes trimmed top to bottom in soft leather and brushed metals. It really is quite special.

In terms of practicality, the SL is very impressive for a two-seat roadster. There’s huge adjustability in the driving position and steering wheel, while the 500-litre boot is wide and deep. Even with the top stowed, a nifty feature swings the roof upwards by 25 degrees so you can load and unload bigger items more easily.