Sporty when you want it to be, luxurious when you don’t, the latest Mercedes SL 500 is a modern GT of rare talent 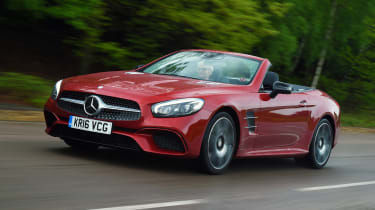 With near supercar pace and executive saloon luxury, the Mercedes SL 500 ticks the boxes that really matter to buyers with £85k to spend on a two-seat convertible. It’s still more grand tourer rather than sports car and that perceived softness will continue to see some enthusiast noses turned up. In fact, the balance the Mercedes SL strikes is the heart of its powerful appeal as a thrilling car you can enjoy every day.

The latest version of the Mercedes SL had already done a stint at sports car boot camp, shedding weight and gaining stiffness courtesy of an all-aluminium bodyshell. Now a facelift has honed its game further with the new 9G-Tronic nine-speed gearbox plus upgrades to the Dynamic Select driving modes and Active Body Control.

It all means the SL 500 that we tested here in the UK for the first time is fitter than ever to make the most of the considerable effort emanating from its throbbing 449bhp 4.7-litre twin-turbo V8.

The SL is a long, elegant car with its vented expanse of bonnet stretching out ahead of the driver. It now gains the latest Mercedes front end with three-pointed star set in a grille specked with twinkling chrome highlights. 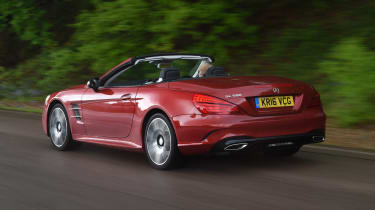 To these eyes, this 2-seat roadster is at its best visually with the roof down as the big rear deck needed to stow the metal and glass canopy becomes less obvious. The up side of the prodigious rear end is that you get a 504-litre boot back there that only shrinks to 364 litres if you want to fold the canopy. It’s easily big enough for a weekend’s worth of luggage – much more if you keep the roof up.

That whole roof opening and closing operation can be done in 20 seconds at speeds of up to 25mph – but strangely you have to begin the process form a standing start. But whichever position the canopy is in, the SL’s cabin is a supremely comfortable environment in which to cover long distances.

As standard you get a driving position with a huge range of adjustment and seats that are shaped for comfort rather than vice-like side support. Our AMG Line model, however, added the £1,725 Active Multi-Contour Seat package with its active side bolsters that move to prop you up during hard cornering and a massage function with seven modes to help the miles fly by. 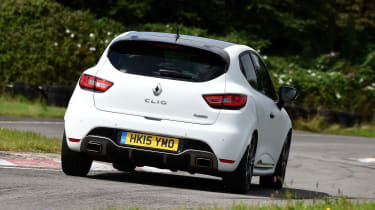 Although this is a car that envelops you in a cocoon of gadget-laden luxury it’s also one that can fire you from 0-62mph in 4.3 seconds and would rumble past 155mph if the speed limiter wasn’t on guard.

700Nm of torque from 1,800rpm also spells big flexibility. Overtaking manoeuvres are completed with the merest flex of the ankle prompting the nine-speed gearbox to seamlessly drop a few ratios.

Just how sporty the SL 500 feels on the road depends on your selection from the Dynamic Select menu of Comfort, Sport, Sport+, Individual and Eco modes.

In Comfort setting the car is more refined than a V8 roadster has any right to be. Even with the roof down, engine and tyre noise is extremely well supressed. With the optional (£525) wind deflector in place, it’s perfectly possible to hold a conversation or hear the stereo at motorway speeds. You might even get close to the 31.4mpg combined cycle economy (we only managed 24mpg). 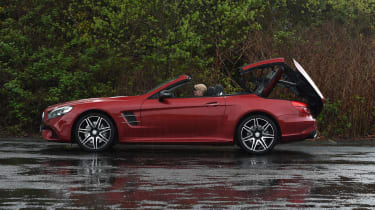 Select sport mode and everything becomes more immediate. The V8 rumble is an ever present, soaring to a bark as the revs build, while steering weight increases, the ride firms and the responses of throttle and gearbox sharpen.

Sport+ is another level with more leeway in the stability control system as the SL’s rear end squats and powers you out of corners. Even using the paddles, the smooth, quick gearbox never changes type to deliver the punching up-shifts you’d get in a more overtly sporting automatic roadster.

The active dampers do further tighten body control and the turn in is sharp but unsurprisingly, the SL doesn’t change direction with the nimbleness of a Porsche 911 Cabriolet. There’s always the feeling that you’re being spirited through the bends on a wave of electronic trickery rather than good, honest rigidity and grip.

With the AMG suspension on our car 10mm lower than standard and 19” wheels, the ride gets choppy in Sport+ mode too. The SL is at it best eating up the ground in the Comfort, then flicking to Sport for the twisty bits.