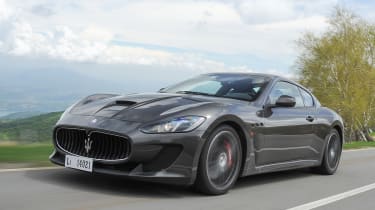 A decade on from when the Maserati GranTurismo wowed the crowds at the 2007 Geneva Motor Show it remains a stunning looking four-seater GT. The Pininfarina-designed coupe replaced the old Giugiaro-penned Maserati Coupe, using a short-wheelbase version of the Quattroporte chassis and a Ferrari-sourced 4.2-litre V8 engine.

A year later, the GranTurismo S arrived, with a new 4.7-litre engine under the bonnet. It grabbed the headlines courtesy of a 0-62mph time of 4.9 seconds and a top speed of 183mph, making it the fastest Maserati ever built.

The 2017 Goodwood Festival of Speed saw the GranTurismo refreshed and restyled for 2018, with a subtle facelift, revised interior and new technology. The regular models were dropped, meaning the range consists of just two models: the Sport and MC. 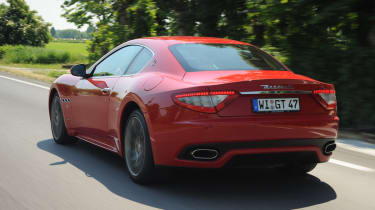 Both are powered by the Ferrari-built 4.7-litre naturally aspirated V8 engine, producing 454bhp and 520Nm of torque, while power is sent to the rear wheels via a six-speed automatic transmission.

The facelift sees the GranTurismo gain a new ‘sharknose’ grille, while the air-ducts are repositioned to sit lower on the front apron. Around the back, there’s a new aerodynamically-efficient bumper.

On the inside, the GranTurismo gets a new 8.4-inch touchscreen infotainment system featuring Apple CarPlay and Android Auto. The centre console has been redesigned with new switchgear, while the drive mode buttons now sit nearer the gear lever.

The range kicks off with the £94,000 Sport, while the more driver-focused and sharper-styled MC weighs in at £110,000. You can tell them apart because the MC looks more aggressive, courtesy of vents and scoops, while the bonnet is carbon fibre on the hardcore version.

Rivals include the Jaguar F-Type, Porsche 911 and BMW 6 Series, but the GranTurismo scores points for featuring two spacious rear seats. Many of its competitors offering this level of performance are either two-seaters or 2+2s at best.

There aren’t many cars that are as emotional as the Maserati GranTurismo. The gorgeous looks and spine-tingling Ferrari V8 engines are enough to forgive anything that the Maserati could possibly do wrong. Not that it does that much wrong anyway – the interior is a little confusing and the fuel economy is woeful, but in every other way the GranTurismo is fantastic. Despite its hefty kerbweight, it feels just as agile as a sports car and is blisteringly quick in a straight line. And for those wanting to take their Maserati on track there is the more focused Mc Stradale with its lighter weight and sportier chassis set up.

With the 4.2-litre V8 consigned to the history books, the 4.7-litre V8 is the only engine offered in the GranTurismo. This Ferrari-built motor can trace its lineage back to the 90s, and it feels like a classic. The soundtrack is intoxicating, while having a big displacement engine at your disposal feels delightfully old-school in an era of turbocharging.

It produces 454bhp and 520Nm, which is enough to catapult this 1,883kg super-coupe to 62mph in 4.8 seconds, before reaching a top speed of 185mph. But if the engine is old-school, the same can be said of the six-speed torque converter gearbox, which seems out of place in a world in which eight or nine ratios are the norm. 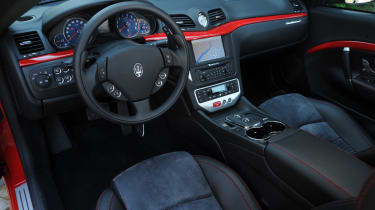 But it works well enough, with a kickdown usually enough to place the engine back in its powerband when exiting a corner. In manual mode, the single clutch paddle-shift transmission can swap cogs faster than you can blink, while the carbon ceramic brakes have fade-free stopping power.

As you’d expect, the MC model is the sharpest handling, thanks to its lower weight, lowered and stiffer suspension, and fixed rate dampers. Yet it manages this without any noticeable loss in comfort, although the ride could be less jittery.

Maserati claims you’ll see just under 20mpg, but in reality this will be much lower if you use the 4.7-litre motor to its full potential. CO2 emissions of 331g/km puts it in the top band for tax, while insurance will be extremely expensive.

The GranTurismo is widely considered to be one of the best-looking cars on the road. Designed by Pininfarina, the GranTurismo blends together elegant lines and menacing supercar touches perfectly. It does a great job of hiding its size, too, making it look far more compact and lightweight than it actually is – after all this is a car that weighs almost two tonnes.

The MC version takes on a more menacing appearance with its new front and rear bumpers, extra aerodynamic features for improved downforce, carbon fibre bonnet and 20-inch alloys. Inside the GranTurismo is incredibly luxurious, with fine leathers and woods covering almost all of the surfaces while the MC Stradale features carbon fibre element and Alcantara. It’s beginning to look slightly dated, though, with a mess of buttons on the dashboard, while the build quality isn’t as good as on the new Quattroporte. 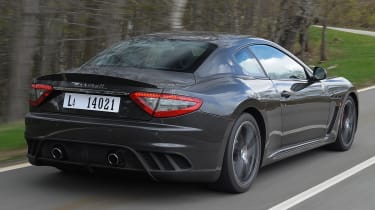 The 2018 GranTurismo features a 8.4-inch touchscreen display, which is offered alongside a new Harman Kardon sound system. The new infotainment system means that the GranTurismo now boasts Apple CarPlay and Android Auto compatibility.

The GranTurismo can legitimately claim to be a four-seater rather than just a 2+2, as the rear seats are spacious enough to fit tall adults. The boot is a little bit tight, though, offering just 260 litres. That means if you're carrying four people, it’s probably best if they don’t each bring a bag.

Maserati has not had the best luck with reliability but ever since Ferrari took over, things have improved greatly. Both engines have been on sale in the GranTurismo and GranCabrio for years now and have proved to be very reliable. It hasn’t been crash tested by Euro NCAP but six airbags come as standard and a host of electronic systems are fitted to help keep you safe. 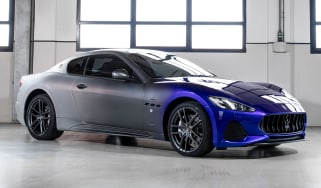 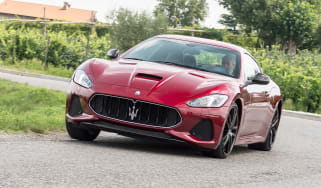 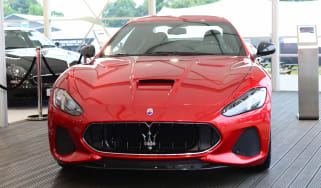 Maserati GranTurismo refreshed and restyled for 2018 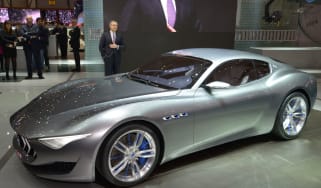 Production plans for the stunning Maserati Alfieri have been delayed, but now there's an electric version in the mix
2017 Maserati GranTurismo will be coupe only 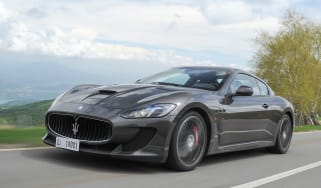 2017 Maserati GranTurismo will be coupe only

Bosses confirm new GranTurismo, due in late 2017, will be smaller and coupe-only
Maserati GranTurismo MC Stradale 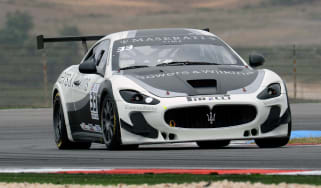 We get behind the wheel of the revised Maserati Trofeo, which is the lightest and fastest Maserati money can buy
Maserati GranTurismo Sport 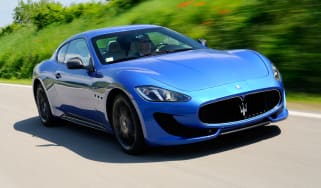 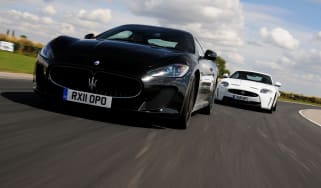 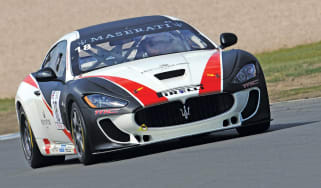 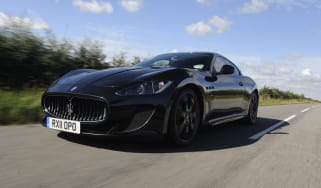 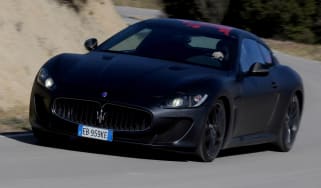 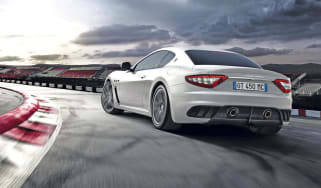 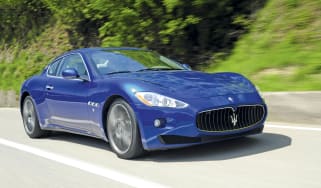 It’s always cut a dash on the road, but is stunning coupe now better to drive with enhanced gearbox?
Maserati Quattroporte GT S 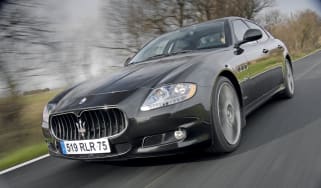 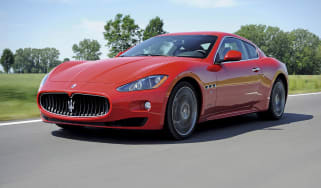 The stunning Italian coupe is celebrating its birthday with a host of sporty upgrades.
Maserati GranTurismo Coupe review 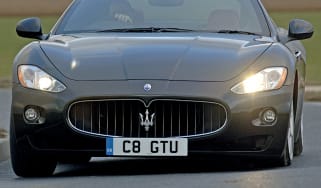 The GranTurismo is a car you can buy with your head as well as your heart.
Maserati GranTurismo 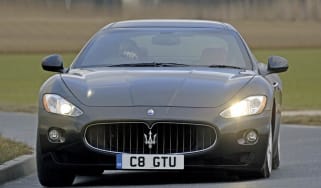 Out with the old Coupé and in with the new GranTurismo, Maserati's best car for 25 years!
Skip to HeaderSkip to Content