Road-legal racer gets more power, less weight and an even louder exhaust. 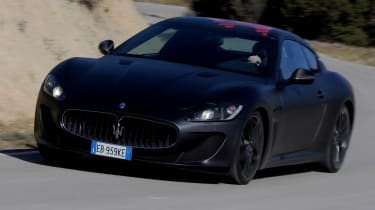 Maserati has taken everything it’s learnt from the GT4 and Trofeo race programs and applied it to the MC Stradale – and the result is stunning. More power, 110kg less weight and improved aerodynamics, as well as tweaked suspension and an aggressive makeover have transformed the GranTurismo. There may be faster and more capable cars of this type out there, but none of them are as useable everyday. While 444bhp is nothing sensational nowadays, it simply means you can use all of the performance more of the time – unleashing this engine’s incredible voice.

Fancy a Ferrari for half the price? Maserati has applied its racing know-how to the GranTurismo coupe to create the stunning MC Stradale – the fastest, lightest and most powerful car in its range. But can this lightweight contender really mix it with the likes of the Porsche 911 GT3 RS and Audi R8 GT?

At the heart of this hardcore coupe is a screaming 4.7-litre V8, borrowed from the GranTurismo S. Power has climbed by 10bhp to 444bhp, and torque by 20Nm to 510Nm, thanks to reduced internal friction and an ECU remap. Around 80 per cent of the maximum torque arrives at just 2,500rpm, meaning it doesn’t just perform near the 7,500rpm red line, it’s flexible enough for everyday use too. But the uprated engine is just the beginning.

To boost agility and help towards a 13 per cent reduction in fuel consumption, 110kg has been carefully stripped away from the kerbweight without ditching luxuries like sat-nav and air-conditioning. Gone are the rear seats - replaced with an optional roll cage - cutting 16kg, while Alcantara-covered carbon-fibre front seats slash a further 26kg. The rest of the savings are shared between the lightweight alloys, reduced sound deadening, carbon-ceramic brakes and a modified exhaust system.

You won’t have any difficult spotting a Stradale either, especially if it’s sporting the matt finish on our test car (yours for a staggering £15,000) and the Trident decal on the roof (a more modest £512 option). Twin vents on the bonnet, a new front bumper with integrated spoiler and deeper side skirts mark in out from the front, while a boot lip spoiler, twin exhausts sitting closer together an all-new rear bumper are added at the back. The eagle-eyed among you will also notice it’s been lowered by around 10mm.

The springs are eight per cent stiffer too, but the good news is you’d hardly notice the difference – it’s still beautifully supple at low speeds. When Maserati calls this a race car designed for the road it isn’t lying, and it’s ability to cruise comfortably is something that sets it apart from all the other stripped-out specials with bone-shaking rides. But don’t worry, this car can do ballistic too.

As in the GranTurismo S it’s based on, there’s an Auto and Sport mode. The former takes care of gearchanges for you and muffles the wider exhaust for maximum refinement, while the latter ups the ante by opening vales in the tailpipe above 4,000rpm, speeding up cog swaps and sharpening throttle response. Push a new button marked Race though and the fun really begins. The exhaust switches to maximum volume at all times, and shift times for the automated manual gearbox – based heavily on the Ferrari F430 Scuderia’s transmission – plummet to just 60ms.

These maximum-attack shifts are only achievable above 4,000rpm and with the throttle at least 70 per cent depressed, but when the next gear slams home it’s like a slap in the face. Factor in the ear-shredding crescendo from the exhausts - louder than anything Maserati currently produces - the four-point harnesses holding you in place and the roll cage behind your head and you’ll be feeling like Fernando Alonso before you know it.

Thicker anti roll bars and bespoke Pirelli P-Zero tyres help the Stradale to stay relatively flat in the bends and grip the road hard. It definitely feels lighter on its feet, accelerates more ferociously than any GranTurismo that’s gone before and wipes off the speed remarkable well, without any sign of brake fade, thanks to it carbon-ceramic stoppers. But it still can’t hide its size next to something more compact like the Porsche 911.

It’s far from perfect this car, but that shouldn’t be held against it. It’s easily the most polished driver’s car Maserati produces, and while it can’t match Ferrari or Porsche for razor-sharp precision it’s spilling over with character and soul. If you’re looking for the polar opposite to more clinical supercars like the McLaren MP4-12C, then this is it.