Is the new Maserati GranTurismo Sport as good on the road as it looks? 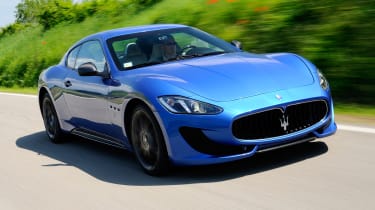 The new Maserati GranTurismo Sport isn’t as dynamically accomplished or as up to date as the Porsche 911, but it’s packed with character and is stunningly beautiful. The subtly massaged Sport isn’t a drastic update – rather, it polishes the GranTurismo that customers know and love. It’s expensive, yes, but few GT cars attract so many admiring glances or generate as many smiles from the driver’s seat. We’d opt for the improved automatic, which is well suited to this car’s relaxed day-to-day usability.

This is the latest version of one of the most stylish coupes money can buy – it’s the Maserati GranTurismo Sport, which replaces the S model.
Like its predecessor, it slots into the range between the 4.2-litre standard car and the race track-inspired MC Stradale. But an increase in power takes it beyond the latter – for now.
The Sport’s 4.7-litre V8 engine produces 454bhp, while torque is a mighty 520Nm. Until the 110kg lighter Stradale gets the same updates later this year, this is the most powerful car in the line-up.
You can choose from the six-speed automatic MC Auto Shift or robotised six-speed manual MC Shift gearbox – we opted for the former, as it now has a manual mode that eliminates kickdown and gives a proper blip on downshifts.

As a result, it offers as much driver control as the MC Shift automated manual box, but it’s smoother on the upchange and more relaxed when cruising. This version is also £3,330 cheaper.
Around corners, the car feels more agile than its size and weight suggest, with light but positive steering and well controlled body roll. Front-end grip is superb, while traction on dry tarmac is excellent.
Press the Sport button, and throttle response, gearchange speeds and steering weight sharpen, while the Skyhook active damping gets stiffer. Better still, the exhaust baffles open up to further improve the intoxicating soundtrack.
Yet despite offering stiffer damper and anti-roll bar settings than before, the car has a well judged balance between ride and handling. The suspension is firm but composed, while turning off Sport mode transforms
it into a comfortable cruiser.
However, for all the joy it delivers from behind the wheel, what sets the GranTurismo apart is its sheer beauty. The revised front bumper takes its shape from the Stradale and allows more cooling for the engine and the brakes, while revised headlamps and LED running lights give the nose even greater presence. At the rear, darker light clusters and oval exhausts look classy.
Inside, not much has changed. The dated switchgear and fiddly sat-nav disappoint, but classic Maserati features such as the curved dash and analogue clock add character. Plus, thick carpets and plush leather ensure that the cabin still feels upmarket.
New sports seats with built-in headrests offer better support and free up an extra 20mm of rear legroom. And while rear space is tight, the Sport can carry four adults – you can’t really do that in a Jaguar XK or Porsche 911.
So while the changes aren’t fundamental, the GranTurismo is better than ever, and the Sport will keep it the top of many wishlists.
Share this on TwitterShare this on FacebookEmail