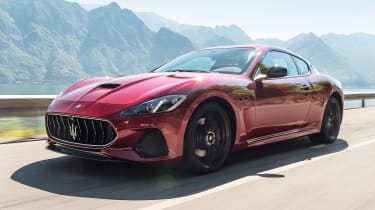 A light facelift to keep the Maserati GranTurismo and its open-topped brother going until the completely new model arrives in a coupe of years’ time. Bringing the entertainment system up to current standards is the most significant move. The heart and soul of the cars is the Ferrari-built engine that will go with the arrival of the new car. That’ll be a sad day because it’s what makes this Maserati really special.

According to one of Maserati’s future product plans, which we were told about at least five years ago, these Maserati GranTurismo and  GranCabrios that we’re driving would both be all-new cars from the tyres up. But they’re not, they’re mild facelifts. This, however, is no bad thing.

For starters under the bonnet there’s the same 4.7-litre V8 fitted to the car that’s been in production since 2007. It’s naturally aspirated and old fashioned in absolutely the right sort of way. The engine is built by Ferrari and is based on the motor used in the 360 Modena, which in turn was a development of the F355 engine. That carbon dates the powerplant back to 1994. The last GranTurismo’s (and Cabrio’s) 4.2-litre engine has been dropped simply because hardly anybody bought it.

The facelift includes the usual economically viable styling tweaks that are done to most cars mid-life whether they’re city runabouts or an exotic Italian grand tourer. The front grille is deeper and is based on the one fitted to the Alfieri concept car. There are two versions of both coupe and convertible: the standard Sport and the MC, which stands for Maserati Corse. You can tell them apart because the grilles have different trim and the bonnet on the latter is carbon fibre and includes a smattering of vents and air scoops. The headlamps have new lamp units inside but are otherwise barely changed. The result is a car that looks slightly different at both ends but still has presence and is unmistakably a Maserati. 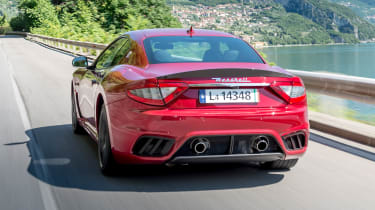 Inside, the cars get a new infotainment system that’s presented on a 8.4in touchscreen. Apple Carplay and Android Auto are supported. Heating and cooling are controlled via a panel underneath with easy to use old fashioned buttons. There’s a wide choice of materials available both in upholstery and trim; from carbon fibre to walnut veneer. As it did before, the cabin feels special.

As does the whole car in fact. The engine is lovely, one of the few non-turbocharged engines left and is a throwback to days when even a big displacement engine had to be revved to extract its full performance. A six-speed torque converter gearbox in a world in which 8 and 9 ratios are the norm, sounds as though it belongs with overdrive and pre-selector gearboxes but it works well enough. Kickdown is usually enough to put the engine back into its powerband coming out of a corner but you can use the always-active paddles if you fancy it.

It’s a big car and weighs in at a hefty 1,883kg. The ride could be less jittery even on the normal setting – Sport doesn’t make it a lot worse – but it’s no worse than most rivals. Although Maserati says it hasn’t changed the steering the hydraulic power assisted set-up appears to have more feel and be better weighted than the previous cars’.

When Maserati does finally launch a totally new generation of the GranTurismo and GranCabrio they will almost certainly be powered by a turbocharged engine. They will be cleaner and (on paper) more fuel efficient but they will for sure lose a lot of the character that this car retains. Neither the open or closed cars feel antiquated next to their rivals, just different. Different in a very appealing way. 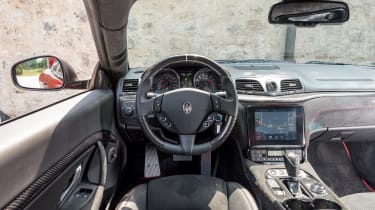 Maserati has sold 37,000 GranTurismos and GranCabrios since 2007 which by the company’s standard is a big number but it still means that you don’t see one on every street corner. The challenge the Modenese company has is to make the new car as full of spirit and character as this one.