Behind the wheel of the ultimate race-inspired version of coupe 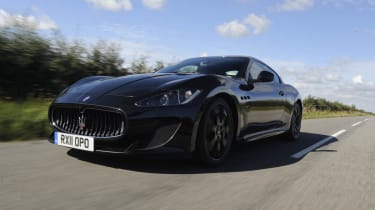 As it’s inspired by Maserati’s MC Trofeo race series, you’d expect the MC Stradale to be an uncompromising stripped-out special. But while it’s the lightest, fastest, most ferocious GranTurismo on sale, it’s still luxurious and comfortable, in a similar vein to the Jaguar XKR-S and Aston Martin V12 Vantage. It costs £21,500 more than the brilliant GranTurismo S, but it’s so talented, many customers will be unable to resist.

It’s the fastest, lightest and most powerful Maserati you can buy – and one of the most desirable supercars ever. This is the GranTurismo MC Stradale: a 442bhp 4.7-litre V8 coupé that seeks to apply the firm’s racing knowledge to the road.
We’ve already driven the Porsche 911 GT3 rival in Europe and loved its ballistic pace, pin-sharp reactions and surprisingly comfortable ride. Is the flagship just as impressive on UK roads?
Watch our video of the MC Stradale being driven at Blighton Circuit below:
[[{"type":"media","view_mode":"content_narrow","fid":"68692","attributes":{"alt":"","class":"media-image"}}]]
It’s jaw-dropping to look at. The MC Stradale adds to the GranTurismo’s gorgeous shape with twin bonnet vents, and a new front bumper and spoiler with deeper side skirts. There’s a boot spoiler and a diffuser-style rear bumper with fresh twin exhausts, which now sit closer together.

If that’s not enough, you can specify matt paint (although this adds £15,000 to the £109,995 price), as well as bright red Trident decals, for £512.
Inside, you still get a luxurious dash with beautiful dials and that exquisite clock on the console. But the cabin has more of a racing feel. The rear seats are ditched – replaced by an optional roll cage – while up front are carbon fibre seats, trimmed in Alcantara. The company has also deleted the air-con and sat-nav, reduced the soundproofing and fitted some lightweight alloys and ceramic brakes. As a result, the MC Stradale weighs 110kg less than the regular GranTurismo.
Engineers have taken know-how from Maserati’s GT4 and Trofeo race cars and fettled the suspension for faster steering response. They’ve dropped the ride height by 10mm, stiffened the springs and added thicker anti-roll bars and sticky Pirelli P Zero tyres.
But the star of the show is the V8. It gives 442bhp – that’s 8bhp up on the GranTurismo S’s engine, thanks to an ECU remap. Rivals are more potent – the Audi R8 V10 GT has 552bhp – but the MC Stradale is still incredibly fast, with 0-62mph in 4.6 seconds (three-tenths quicker than the S) and a top speed of 187mph.
And the best bit is the soundtrack; it’s one of the finest of any car ever. Select the new Race mode and the V8 crackles at idle, before its note reaches a screaming crescendo at the 7,500rpm red line as baffles in the exhaust open wider
and for longer. The Race mode has another trick up its sleeve: amazingly fast gearshifts.
Provided the engine is revving at more than 4,000rpm and the throttle is more than 70 per cent open, the six-speed automated manual box will bang through each ratio in a mere 60 miliseconds. And your head will be forced back violently with every pull on the steering wheel paddle.
However, the MC Stradale still has the refinement of a true GT car. Although it turns into corners faster, stops more quickly and grips harder than the standard model, when you select the Auto or Sport modes, the newcomer barely feels any less comfortable than the regular GranTurismo.
It’s not perfect. There’s more pitch and roll than in the smaller, stiffer 911 GT3 – the Maserati never manages to shake off its sheer size and 1,770kg weight – while the four-point harnesses and roll cage are showy options.
Bosses are calling it a racer for the road, but the MC Stradale is more GT car with everything turned up to 11 – and that’s a good thing. It offers even more soul and emotion than the stock GranTurismo, but it’s still usable every day. That is some feat.
Share this on TwitterShare this on FacebookEmail