New Mercedes SL 63 AMG facelift spotted out and about 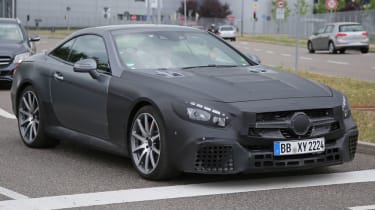 This is the new Mercedes SL 63 AMG. The storming two-door is set to get a raft of mid-life changes, including new styling and an updated interior, with the possibility of a new V8 engine.

Despite the body cladding on this prototype, it's clear that the 2016 SL gets a fresh face. Thinner headlight clusters sit either side of the fresher, more upright grille and incorporate new LED daytime running lights. Larger air intakes (where the daytime running lights used to be) on the refreshed front bumper take their inspiration from the AMG GT supercar.

Although retaining the square quad-exhausts, the rear bumper has been lightly refreshed and is joined by a new set of tail lights and a smoother bootlid aiming for a sleeker, more modern design. The rest of the SL range is expected to receive similar styling tweaks. 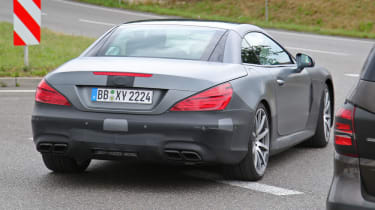 Previous spy shots of the standard SL indicate that Mercedes is planning on featuring a larger 'floating' touchscreen and likely a redesigned steering wheel. It is thought that the touch-sensitive control pad for the infotainment system, seen across the rest of the Mercedes range, will also be fitted.

It's not clear yet whether the 5.5-litre twin-turbocharged V8 engine will be present. It could receive a power upgrade from 585bhp in order to reduce its 0-62 mph sprint time from 4.2 seconds.

But Mercedes has another trick up its sleeve in the form of the 4.0-litre twin-turbo V8 found in the C63 AMG and AMG GT. That could be shoehorned into the SL in pursuit of lower CO2 emissions and improved fuel economy, although it will need some tweaking to even match the current 63's output.

Now read our full review of the Mercedes-AMG GT supercar.

The new Mercedes SL roadster will return with a fabric roof and will share tech with the AMG GT sports car. Our exclusive images preview how it could …