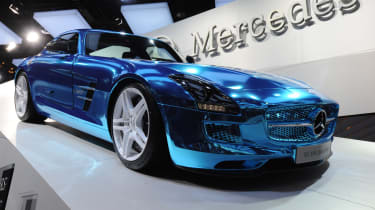 The Mercedes SLS AMG Electric Drive has been unveiled at the Paris Motor Show. The electric-powered SLS is the full production version of the SLS E-Cell concept, and it goes on sale here in left-hand drive only in summer 2013.

The SLS Electric Drive is powered by a 548kg lithium-ion battery that gives a total energy content of 60kWh. That gives the SLS a range of 155 miles on a full charge.

Using a 22kW fast-charging unit, the battery can be recharged in around three hours, but this increases to 20 hours if you use a conventional household socket.

The electric drivetrain for the SLS was developed by Mercedes AMG High Performance Powertrains in Brixworth, the same team which makes the KERS system for Mercedes’ F1 team.

To highlight the differences between the SLS Electric Drive and the regular car, Mercedes has added a deeper front splitter, fins in the bonnet and gloss-black front wings. There is also a new body-colour front grille and rear diffuser, plus new alloy wheel designs – 19-inch at the front, and 20-inch at the back.

Inside, the SLS Electric Drive features a special instrument stack that relays information about battery performance to the driver. Mercedes has also packaged the batteries in such a way that space in the cabin and boot remains the same as the normal SLS.

Instead of the characteristic growl of AMG’s 6.2-litre V8 engine, the SLS Electric Drive has a specially synthesized noise which Mercedes claims adds “a distinctive and unique signature” to the car.

The Mercedes SLS Electric Drive goes on sale here in summer 2013 as a regular series production model alongside the SLS Coupe and Convertible.

It will be sold in left-hand drive only, and there are no plans to sell it anywhere other than Europe. Prices are yet to be decided, but the predicted price in Germany is €416,500 (£330,000) – considerably more than the £168,425 price of the standard SLS Coupe.