Mercedes is charging in to shake up the supercar class – and we take the wheel of amazing battery-powered E-Cell. 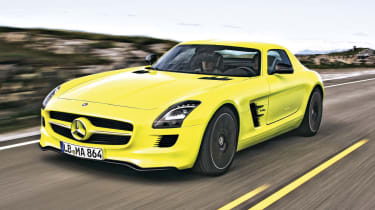 The key to the E-Cell’s success is the fact the SLS was designed to run on petrol or electric power from the start. The neat packaging and even weight distribution make it feel like a truly polished product. With pace to match the V8 model and the same dramatic looks, it proves performance cars have an exciting future. If only it had a more realistic range and a soundtrack to match its performance.

The future is bright for eco-friendly supercars – and here’s the model that proves it! Following in the wheeltracks of Audi’s e-tron comes the stunning SLS AMG E-Cell – Mercedes’ all-electric interpretation of its gullwing flagship.

The ‘regular’ 563bhp V8-engined SLS AMG is no shrinking violet. It blasts from 0-62mph in 3.8 seconds and hits 125mph in 10.8 seconds. Remarkably, though, this battery-powered SLS nearly matches that – taking only two-tenths longer to achieve each benchmark.

While there is a handful of cars capable of covering 0-125mph in 11 seconds, none of them does it in silence like the SLS E-Cell. Factor in the absence of gearchanges – thanks to the single-speed transmission – and the relentless surge of acceleration makes the new model feel like one of the fastest cars on the road.

The stand-out difference between the petrol and electric versions of the SLS is the noise – or lack of it. Thrust is provided by four electric motors, producing a total of 533bhp and more importantly an incredible 880Nm of torque. A pair of electric motors are mounted on each axle, giving the SLS four-wheel drive. Each motor can rev to 12,000rpm.

Providing the power is a 48kWh liquid-cooled lithium-ion battery, cleverly packaged under the bonnet, in the empty transmission tunnel and behind the seats. This unique layout is no coincidence, either – since development of the SLS began, an electric drivetrain was factored into the design. The result is that the set-up sits low in the chassis – allowing the newcomer to retain the standard model’s balanced weight distribution.

On the move, the E-Cell grips even harder thanks to its four-wheel drive and a unique torque vectoring system, which shuffles power to the wheel with most grip. Each tyre can be taken right to the limit of its adhesion, resulting in some startling cornering speeds.

And the car stops as well as it goes, thanks to carbon-ceramic discs and regenerative braking.

Inside, the retro-inspired cabin has been reinterpreted to suit the E-Cell’s futuristic character. A huge 10-inch touchscreen dominates the centre console, and operates the audio, climate and navigation systems. There are new park, reverse and drive buttons for the transmission, too.

But the E-Cell is not without its faults. Although Mercedes says a range of around 100 miles is possible, that could drop to as little as 30 miles if you fully exploit the car’s performance potential – ruling out any prolonged sessions on the track. Another downside will be the estimated £250,000 price tag when the model goes on sale in 2012. This is around £100,000 more than the more practical petrol SLS.

For the full review make sure to get next week's copy of Auto express on sale June 30.