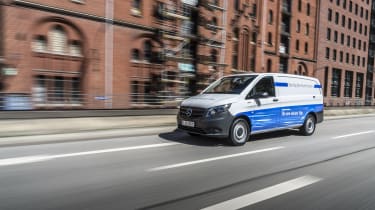 The Mercedes eVito won't be the solution to every business need, but for companies that do lots of deliveries in a small area, it's a better option than the smallest Vito diesel. If the sums work for you (and Mercedes will help you get to the numbers you need) and you have the ability to charge it up, then the eVito is a step forward for electric mobility for business.

With ever-tighter restrictions starting to limit the type of vehicles that can and cannot enter city centres across the globe, there is a need for manufacturers to produce commercial vehicles that can deliver goods in these areas while producing zero emissions. That's where the Mercedes eVito hopes to meet a demand for zero-emissions delivery vans.

It's the full-electric version of the mid-sized Vito panel van, but instead of diesel power under the bonnet, there's Mercedes' electric drive system. This features a 113bhp electric motor connected to a 41kWh battery (similar to the one found in the Mercedes S-Class plug-in hybrid) to give the eVito a range of 93 miles. Once the batteries are exhausted, they can be recharged from flat in 6 hours using a Mercedes wallbox charging unit.

The aim of this van is to be a substitute for the entry-level version of the Vito CDI diesel, which is why it has the same power output. While the battery range is estimated to be enough for a day of deliveries for last-mile courier services working in those city centres that could soon be no-go zones for conventional diesel vans.

The electric motor fits under the bonnet where the diesel engine would normally be, while Mercedes has managed to mount the battery pack under the cargo area without compromising load volume. It's protected underneath by full-length 3mm steel plate, while the batteries are fitted within a steel cage to prevent them being damaged in an accident.

The eVito will be offered in the Vito van’s Long and Extra Long body styles, giving a cargo volume of 6.0 to 6.6 cubic metres, while payload is still rated at over one tonne for both variants, of course, if you drive all day with a full load on board, that will have an impact on the driving range of the eVito. As well as the panel van body, the eVito will be offered as a multi-seat passenger van, too. 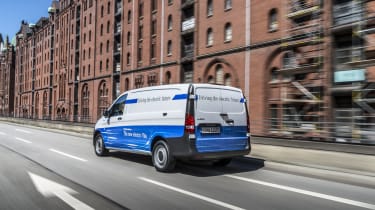 In the cab, there are no obvious differences between the eVito and the standard diesel Vito version. The eVito is an auto, so it has a column-mounted gear selector, while the dot-matrix display between the dials shows you the drive mode you are in. There are C, E and E+ settings (Comfort, Eco and Extended range), with the latter two limiting power, top speed and climate control to help boost how far you can go on a charge.

One addition to the eVito's cabin is a pair of paddles behind the steering wheel. These increase or reduce the amount of energy recuperation that the electric drive system produces, ranging through D++, D+, D and D-. The final D minus mode is the default setting, and that delivers the maximum amount of resistance, meaning you can easily drive the eVito using one pedal. At the other end of the scale, D++ is the equivalent of freewheeling in neutral.

Mercedes has also fitted a heat pump that's designed to recuperate heat energy to get the cabin warmed up faster in winter, although most models will also come with heated seats as standard, as this is a more efficient and faster way of keeping drivers warm in cold weather. The heat pump also works to cool the interior when it's warm, as well as prevent the battery pack from overheating. Like other EVs, there's also the provision to pre-condition the cabin with warm or cold air while the eVito is still plugged in and charging.

On the road, the addition of electric drive turns the Vito into a more refined van, but it also gives it a surprising turn of speed. The extra weight of the batteries (which add around 300kg to the Vito's kerbweight) help the eVito feel more composed over bumps, while their central position under the load floor keeps the centre of gravity low. It's no sports car, but the eVito is easy to drive and quiet around town - Mercedes will equip the van with a sound generator that works at speeds up to 30mph to help warn other road users of the van's presence.

The main appeal of any electric vehicle is the instant acceleration it provides. The eVito is no different, and while it's brisk off the line, although not Tesla-fast, it feels far quicker than the Vito diesel with the same output. And as the eVito achieves this in near-silence, this is a van with a level of refinement usually only reserved for the Mercedes car range. 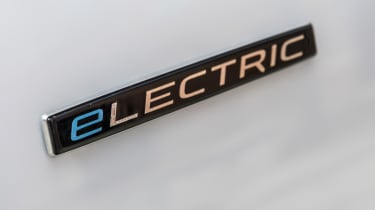 Of course, questions will linger with any potential buyer about the feasibility of owning and running an electric van. However, Mercedes hopes to have those concerns covered. One useful tool Mercedes offers is the free eVAN Ready smartphone app, which allows potential buyers to track their everyday van use (including miles driven and the ambient temperature) to see if an electric van can fit into their work.

Mercedes is also offering help to install charging stations, as well as the possibility of charging monitoring via its Mercedes PRO fleet management software. And Mercedes also has an online tool to allow potential buyers to look at the total cost of ownership (TCO) of its electric vans. The theory behind this is that while the eVito will be more expensive as an initial purchase, the cheaper cost of recharging the van compared to diesel, combined with local incentives and tax rebates for electric van users, should make the overall ownership cost the same as it will be for a conventional Vito.