MG Motor is planning to bring plug-in hybrid powertrain to UK, most likely in 6 family hatch and GS SUV 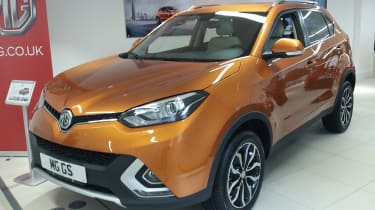 Things appear to be on the up at MG. Not only will we be seeing the new GS small SUV on sale next year and a smaller Nissan Juke rival in 2017, but now the company is keen to bring plug-in hybrid tech to market here very soon.

Speaking to Auto Express, MG’s UK managing director William Wang showed his enthusiasm towards plug-in hybrid and fully electric technology, stating the firm would be "silly not to go that way” when so many manufacturers have done so over the last five years.

Wang claimed that “you can only go so far with just petrol and diesel”, and investment in electric and hybrid tech is the next step. He also stated that the first car to receive such a powertrain initially would be the recently facelifted 6 hatchback, with the Nissan Qashqai-rivaling GS being the next priority further down the line. 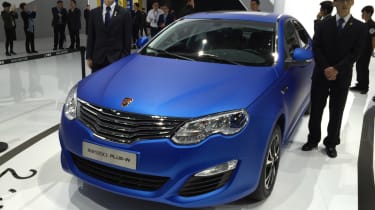 Chinese parent company SAIC already has a plug-in hybrid powertrain in the Roewe 550, which shares its platform with the 6, and an adapted version of this is on the cards for Europe. The 550 PHEV, which has been on sale in China for two years, is powered by a 1.5-litre petrol engine and electric motor that combine to produce 194bhp. The 11.8kW battery can be charged in six to eight hours, while the pure electric range is said to be 36 miles.

The current MG 6 hatchback is only available with a 1.9-litre diesel engine, so a plug-in hybrid petrol option in the Ford Focus rival should broaden its target audience. In terms of when we can expect to see a plug-in 6, Wang was keen to point out that expanding its range with the forthcoming two new SUVs was the focus for the immediate future.

Although an all-electric model is not off-the-table, the MG EV concept we drove back in 2014 was, Wang told us, considered “too small” by Chinese executives and is unlikely to be built any time soon. 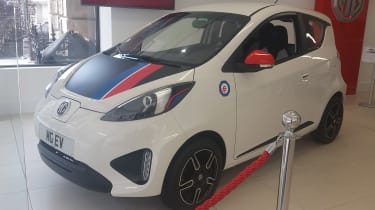 The comments were made at the launch of MG’s new flagship showroom in Piccadilly, London. The glitzy new location has been positioned to attract tourists, car enthusiasts and potential buyers in from the capital’s busy streets in order to "gain an insight into the modern MG brand”. It’s open to the public now, and features models such as the current 3 and 6, a non-UK example of the new GS and the EV electric concept.

Now read our round-up of the 2015 Shanghai Motor Show.