The MINI Clubman estate is a more practical take on the hatchback, with an increased wheelbase and improved space 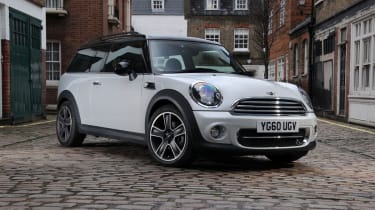 The MINI Clubman can trace its inspiration back to the Mini Traveller from the sixties, but the bigger and more practical estate is every inch a modern MINI. What's unique about the Clubman is that it doesn't really have any direct rivals - besides perhaps the Skoda Fabia Estate and Peugeot 207 SW - so ticks the box for buyers looking for something a bit different. A single rear suicide door and side-hinged double doors to access the boot are also unique. However, with the arrival of the Countryman, the Clubman's place in the line-up as the more practical MINI has been usurped.

Despite the stretched-out dimensions the Clubman still steers with the same enthusiasm as the MINI hatch. On top of that, its longer wheelbase means its ride is still firm - but is more forgiving than the hatchback or convertible. The engine range is identical to the hatch and includes everything from the 98bhp 1.6-litre One right through to the tyre-smoking 208bhp JCW. Our favourite is the One D, with CO2 emissions of just 103g/km it strikes an excellent balance between performance and price.

The Clubman commands a premium of around £1,000 compared to the equivalent MINI hatchback, but that's justified by the extra boot space. Once you've swallowed the initial purchase price, running costs should be relatively low. Sky-high fuel economy, especially on the diesel models, and rock-solid residuals - as good as an executive or sports car - mean that despite being a premium product the Clubman should cost little to own. And if costs are less of an issue, the Cooper S and JCW versions are surprisingly fast and fun to drive.

From the A-pillars forward, the Clubman is identical to the hatchback on which it's based. From there on, the love-it-or-hate-it shooting brake bodystyle is unique. There's only one rear-hinged back door, on the driver's side, and barn-door style openings for the boot. The overall effect is unlike anything else on the road, but unmistakably a MINI. Inside, the dashboard is pure MINI, with lots of retro touches.

The wheelbase is 80mm longer than the hatchback and that adds much-needed legroom in the back. Boot space in the Clubman is still not huge, but much improved compared to the hatchback. With the rear seats in place there's 260 litres of loading space and 930 litres with them folded. That's roughly equivalent to a Citroen DS3. The van-like rear doors are easy to use but restrict rear visibility on the move, while the suicide door is located on the driver's side so passengers have to step out into the road - according to MINI it would have been too costly to swap the door over for right-hand-drive cars.

The MINI hatchback on which the Clubman is based, scored five stars for adult occupant protection in its Euro NCAP test, so the Clubman is a safe place to be. It benefits from BMW's excellent reliability record, plus the materials used and build quality are all superb. Front and side airbags come as standard, as do curtain airbags which extend all the way in the Clubman to account for its increased length.