Practical MINI Clubman gets John Cooper Works treatment, and is set to star at Paris before arriving in late 2016 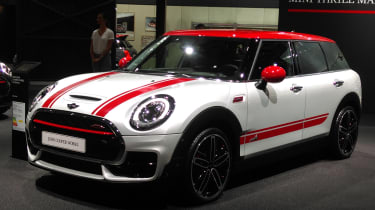 If you're after a hotter version of MINI's longest car yet, this is it. The new MINI Clubman John Cooper works, or JCW, is here. MINI has applied its sportiest treatment to the twin-door hatch, adding four-wheel drive and a beefier bodykit. It has revved its way into the 2016 Paris Motor Show after being revealed earlier in September.

Under the bonnet of the John Cooper Works Clubman is the same 2.0-litre twin-scroll petrol turbo as in the JCW hatch, producing 228bhp but 20Nm extra torque, at 350Nm. That means a 0-62mph time of 6.3 seconds (the same as the hatch) and a top speed of 148mph. The figures are identical whether the car is fitted with the six-speed manual or eight-speed auto box – even though the Clubman is around 300kg heavier than the hatch thanks to its larger body and all-wheel-drive system. 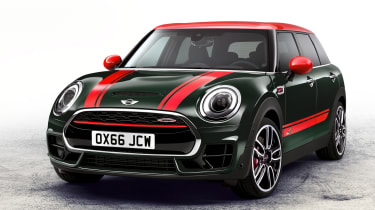 The Clubman uses MINI’s All4 all-wheel-drive system, which is capable of sending power to the rear wheels when required in a fraction of a second.

As with the JCW hatch, this car gets a firmer suspension set-up than Cooper S models, which MINI claims is tailored to the car’s extra weight and length. Adaptive dampers are optional, while all cars feature MINI’s drive mode selector, tweaking throttle response and steering weight.

Shown here in JCW Rebel Green paint with red stripes, mirrors and roof, the John Cooper Works also gets two unique wheel designs, badging and chunkier bumpers to mark it out from the regular Cooper S Clubman. Buyers can delete the stripes and roof colours if they prefer. Cooling inlets replace the standard foglamps, funneling air over the brakes. The unique side sills, roof spoiler and rear apron are designed to reduce aerodynamic lift, too.

Inside, there are new sports seats, stainless steel pedals, a black roofliner, red trim and a sportier wheel. JCW door sill inserts complete the Clubman’s racy look. The six-door’s practical body is unaffected, too, with the option of 40:20:40 split-folding seats, 360-litre boot and total load capacity of up to 1,250 litres. 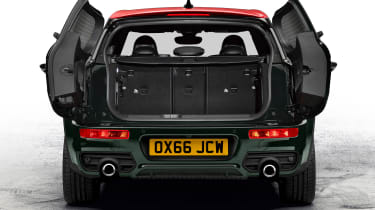 Standard kit includes LED lights, sat-nav and parking sensors, while a new option is MINI Navigation XL – an 8.8-inch central display that can be worked by a rotary dial or, for the first time, touch-sensitive controls.

It’s expected that most buyers will shell out for the £2,000 Chili Pack, too, bringing more upholstery options, heated seats and 19-inch alloy wheels. The John Cooper Works Clubman starts from £29,345 as a manual or £30,945 as an auto, and is available to order now. Deliveries are expected at the end of the year.

What do you think of the MINI Clubman JCW? Let us know below...

Welcome to our Paris Motor Show hub page. Scroll down for all our Paris content...
MINI Clubman review