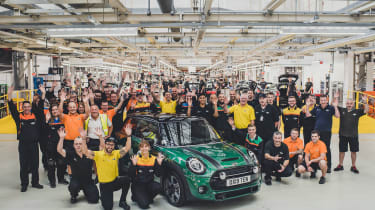 In the same year that MINI celebrates its 60th anniversary, the firm has just built its 10 millionth model.

The 10 millionth car is a MINI 60 Years Edition; the model took centre stage during an event at the firm’s production facility in Oxford where MINI gathered 60 owners of 60 cars – one from each year of production.

That 10 millionth car is marked out by its British Green paint work, black bonnet stripes, LED spotlights and unique 17-inch two-tone alloy wheels. Under the bonnet sits a 190bhp 2.0-litre four-cylinder engine from the Cooper S. 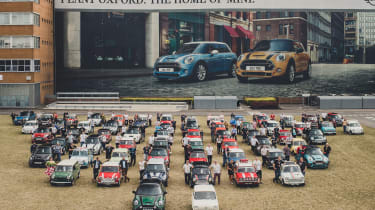 The landmark model was joined by the first ever Mini built, known as 621 AOK, at the Oxford plant. Built back in 1959 and designed by Alec Issigonis, it was built at the Oxford site where production remained up until 1968 before moving to Longbridge in the West Midlands.

BMW acquired the brand back in 1994 and has invested over £2 billion into UK manufacturing sites. Production output from the Oxford plant has risen from 300 cars per day back in 2001 to around 1,000 today. MINI claims a new model rolls off the production line every 67 seconds.

The 10 millionth model will join BMW’s heritage fleet, to be used for media engagments and brand events. It isn't clear whether the car will be sold in the future.

Click here to read our review of the MINI Cooper S 60 Years Edition....