The MINI Cooper S 60 Years Edition celebrates the brand's anniversary and is limited to just 500 examples, but what's it like on the road? 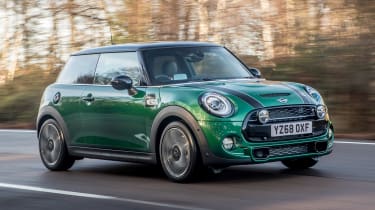 This is not truly a new car; the MINI Cooper S 60 Years is a straightforward paint-and-stickers special edition, albeit one that only 500 of which will be made. It is also the only MINI for now that comes with the delectable British Racing Green IV paint. It’s an anniversary worth celebrating, clearly, and the Cooper S remains a delight to drive. But it would have been nice to have something truly new to celebrate MINI’s birthday.

Sixty years is a heck of an anniversary, and one that MINI has done well to hit with so much of its original spirit intact. Certainly, given the sequence of nadirs struck by former custodians of the brand, it’s a miracle that we still have MINI at all.

Thanks to BMW’s efforts, though, we do, and while it may have moved a million conceptual miles from its cheap-and-economical beginnings, the modern MINI still has plenty of the original’s appeal.

To celebrate that 60th birthday, MINI has launched a limited edition (just 500 will be made available, shared between the UK and Ireland) - the Cooper S 60 Years Edition. You’ll be able to tell it, primarily, from the rather gorgeous new British Racing Green IV paint job. 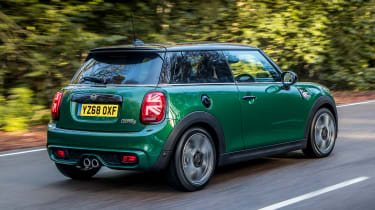 It’s not often that we focus on a car’s colour first, but until this hue replaces the existing dark green option across the rest of the MINI range (which it will do in due course), this will be the only model to have it. It’s lovely — a deep and rich colour, with an enticing sparkle.

Of course, we’re concentrating on the paint, as well as the black roof and matching bonnet stripes with their 60th anniversary script, because there’s not a lot else to talk about. While the 1959 Mini (technically it was the Austin Se7en or Morris Mini-Minor until 1962) was shocking in its newness, this anniversary car is similar to the MINI Cooper S that we already know. There are unique two-tone 17-inch alloy wheels, standard front spot lamps and some gorgeous leather seats finished in ‘Dark Cacao’ inside. But that’s basically it.

For your £29,995 you do get the largest 8.8-inch infotainment screen, which comes with sat-nav, Apple CarPlay, Bluetooth and wireless phone charging. There are also standard front and rear LED lights, with the rears in the now-standard Union Flag pattern, for a touch of extra sixties cool.

The Cooper S, with its 189bhp 2.0-litre turbocharged petrol engine, and its eight-speed automatic gearbox, is about as far away as you can get from a first-generation Mini. Yet it still manages to feel like one.

The steering is a little more rubbery, but it still darts into corners. It’s bigger and heavier, but it still surges forward with an entertaining growl from the exhaust – although the pops and bangs of the exhaust overrun have been sacrificed to the needs of WLTP certification.

As good as a Ford Fiesta ST? No, probably not. It’s much pricier, too – although the cabin comfort and quality trounce the Ford. But we’re glad that, 60 years on, the MINI is still here.