Cloth-top MINI Convertible adds another dimension to MINI ownership, but at the expense of practicality 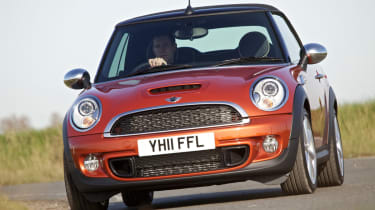 For those who put an emphasis on style and fun over practicality and handling, the MINI Convertible is an excellent choice. It doesn't offer the space of bigger rivals like the VW Golf Cabriolet or Audi A3 Cabriolet, or the quirky sardine-tin roof from the Fiat 500C, but it blends MINI's universal desirability with an excellent range of engines, plus handling that's almost as sharp as the hatch. Now, you can even buy it with a diesel engine for lower running costs.

The big news from last year's mid-life refresh was the addition of a Cooper D model to the line-up. Its BMW-developed 100bhp 1.6-litre diesel returns fuel economy of more than 70mpg and is sufficiently refined, but due to the convertible's extra weight it can feel under-powered at low revs. We'd recommend the 181bhp Cooper S for its energetic turbocharged engine and tuneful exhaust, which suits the convertible's sporty nature better. There's still a hint of flex in the chassis over broken surfaces, but for the most part its every bit as fun to drive as the hatchback. However, the price you pay for that fun character is very stiff ride that thumps and crashes over bumps.

There's no getting around the fact that the MINI Convertible is pricey for what you get. The equivalent cabriolet costs almost £2,500 more than the hatchback, and it's also more expensive than its nearest rival, the Citroen DS3 Cabrio. Efficiency is impressive though – even the Cooper S, which completes 0-62mph in 7.3 seconds, emits just 139g/km of CO2, thanks to standard-fit stop-start. The most efficient option is the Cooper D, with CO2 emissions of 105g/km and claimed fuel economy of 70.6mpg.

The transition from MINI hatchback to convertible is well executed. With the fabric roof in place it shares the same silhouette as the hatchback, and with it folded on the rear deck it has a classic convertible profile. A huge range of colours, wheel designs and graphics are available making the Convertible as easy to personalise as the rest of the range. The Convertible was facelifted in summer 2010, which included a new front bumper and LED rear lights. Inside, the dash is lifted straight from the hatch, so features the same trademark central speedometer and high-quality switchgear.

Practicality is not the MINI Convertible's strong point. There's plenty of room for passengers up front, but what little rear room there is in the hatchback has been squeezed further to make room for the folding roof. That means the rear seats are really only suitable for small children, and the tiny 125-litre boot will only fit a pair of small bags. As a result, the rear seats become a useful area for carrying large items - rather than additional passengers. Being able to fold the roof back either partially, or all the way, at the touch of a button, makes this MINI more enjoyable during the summer months. The roof can be operated at speeds of up to 20mph, and takes nearly 20 seconds to fully open. That's slower than the DS3 Cabrio's roof, which can be operated at speeds of up to 75mph. At higher speeds buffeting is kept to acceptable levels thanks to the upright front screen, while an optional wind deflector can be added across the back seats.

The standard hatch received the full five-star Euro NCAP crash test rating and, although the convertible hasn't been specifically examined, it features the same safety kit and adds pop-up roll hoops that deploy in the event of an accident. Until that time they are safely stowed and don't restrict rear visibility. BMW's build quality and reputation for reliability suggest little is likely to go wrong, but be aware that any damage to the fabric top can be costly to repair.