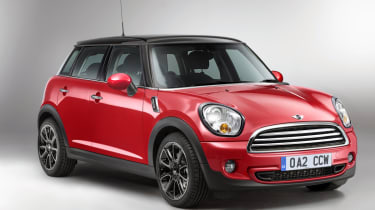 The next-generation MINI will be sold as a five-door hatch as part of a line-up that could stretch to as many as 10 bodystyles.

The traditional three-door hatch will remain the “pinnacle of the brand”, but the roomier five-door will be the first model in a new range that will arrive in 2014, using a new platform shared with BMW.

Our exclusive images reveal how the five-door will shape up, with two shortened doors on each side and a slightly more bulbous shape at the rear. As with the Clubman, the five-door gets an extra set of smaller windows to help improve rear visibility.

Engineers aim to free up a bit more cabin space in the next-generation three-door anyway, but the flexibility of the new platform should enable MINI to stretch the wheelbase of the five-door and provide more rear legroom.

There’s a bit more of a rear overhang than in the three-door, which should address the MINI’s infamously small boot, too. And this extra space and practicality will boost the car’s appeal for families and markets that demand more room, like the US. The brand can’t afford to be left behind by small premium five-doors like the Audi A1 Sportback, either.

But while it appears that the MINI is becoming sensible, the company is keen to ensure this new platform allows the next-generation family car to be as sharp and fun to drive as ever.

Part of that will be down to a range of new three-cylinder petrol and diesel engines developed with owner BMW. Power outputs will range from 122bhp to around 200bhp for the petrol engines, while the diesels will produce between 100bhp and 181bhp.

We’ve been told to expect fuel economy close to 100mpg in the most efficient versions, as well as CO2 emissions of about 80g/km.

Once the five-door hatchback has launched, MINI will begin to expand the model line-up even further, with everything from a saloon to a seven-seater version of the Countryman.

MINI boss Kay Segler told us: “The brand is so broad, it doesn’t limit itself to a size, a product category, an idea – the only things that we don’t like to do are normal things.”

Each bodystyle will be marked out by unique design cues. So, for example, the Coupe and Roadster will get more aggressive features, while the Clubman will come with a more dynamic profile than the current boxy model.

In the meantime, the Clubman-based Clubvan will hit dealers in March, and a JCW version of the Paceman stars at January’s Detroit Motor Show. 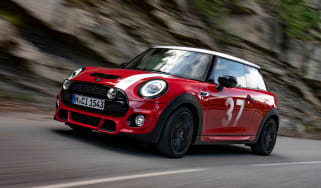