The John Cooper Works Paceman is the most expensive MINI ever. But it’s not the best… 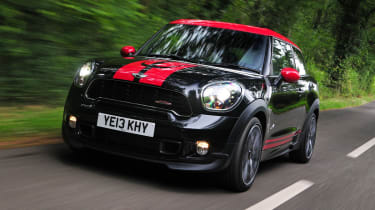 Following its MINI Hatch, Convertible, Clubman, Roadster, Coupe and Countryman models, MINI has added a flagship John Cooper Works Paceman to its range. It has the honour of becoming the most expensive MINI money can buy, at just under £30,000, and is powered by the familiar 215bhp 1.6-litre four-cylinder turbo engine that is used in other JCW MINI models. Like the JCW Countryman, MINI’s ALL4 four-wheel-drive system is standard. Choosing rivals for the JCW Paceman is tricky, thanks to its unique mix of SUV and hot hatch credentials, but if you go for a performance SUV, the smaller and cheaper Nissan Juke Nismo is an alternative, while the three-door Volkswagen Golf GTI offers more power, classier looks and undercuts the JCW Paceman on price.

As the flagship for the whole MINI range, the JCW Paceman should be better to drive. The 215bhp 1.6-litre engine sounds good, but the Paceman doesn’t sprint off the line with the verve the claimed 0-62mph time of 6.9 seconds would suggest – the added grip of the four-wheel-drive system is counteracted by the car’s 1,400kg weight. The sports seats aren’t supportive enough in the bends, and that’s a shame as the grip produced mid-corner is impressive. Two driving modes are available – Normal and Sport – and the latter makes the steering heavier, the throttle respond faster and provokes a sweet pop and burble when you step off the accelerator. However, as well as getting heavier, the steering loses its feel and becomes too artificial. The uprated brakes are excellent, with good pedal feel and stopping power, while grip is so good with the traction control on, that the extra Sport mode for the DSC isn’t really needed unless you venture on to a track.

The MINI’s relatively small engine and fuel-saving kit like stop-start, brake energy regeneration and a rather conservative gear shift indicator when you drive in normal mode, help it return decent fuel economy of 38.2mpg and emit 172g/km of CO2. However, as with all performance cars, the Paceman’s fuel economy takes a hit when you make the most of the engine’s performance. But while running costs should be reasonable, the big problem with the Paceman is its price – it’s almost £6,000 more than the Paceman Cooper S with four-wheel drive. It's also undercut by the VW Golf GTI and costs almost as much as the superb BMW M135i. That’s an awful lot to pay for a car that looks a bit different to the norm.

Like it or loathe it, the MINI JCW Paceman certainly makes a style statement. Similar to the JCW Countryman at the front with its aggressive front bumper, the Paceman’s three-door coupe-esque shape certainly makes the car stand out more than the Countryman. The Paceman is particularly extrovert if you buy the car in a dark colour and opt for MINI John Cooper Work’s signature Chili Red paint for the roof and door mirror caps. Nine exterior colours are available, while 18-inch alloys are fitted as standard – although 19-inch two-tone ‘Crusher’ rims are optional. Inside, the design is familiar to those who have driven a MINI before, although the door mirror and electric window switches are now on the doors rather than in the centre console. The over-sized central speedo was a novelty when the ‘new’ MINI hatch arrived in 2001, but seems a bit overdone now.

The MINI JCW Paceman offers a surprisingly large, two-level boot that's accessed via a large tailgate. The boot offers 330 litres of space, which can be boosted to 1,080 litres by lowering the rear seat backs. However, the JCW Paceman is a four-seater only. The two individual rear seats are easy to access but head and knee space aren’t great for taller passengers. The centre rail between the seats is neat, though, allowing you to add cup or sunglasses holders which clip and slide between the seats. The interior comes in black as standard, including the anthracite headlining, which can make the car a bit gloomy inside.

The MINI JCW Paceman is built using the same underpinnings as the Countryman, although all Paceman models feature special sports suspension that lowers the car by 10mm more than the five-door model. Both the Countryman and Paceman are built under contract for MINI by established firm Magna Steyr. The JCW Paceman also uses the BMW-PSA-developed 1.6-litre engine, gearboxes and BMW-sourced four-wheel-drive system that have been used in other MINI and BMW products for some time now, so reliability shouldn’t be an issue. There are some scratchy, hard plastics dotted around the interior, though, which is disappointing given the car’s price. 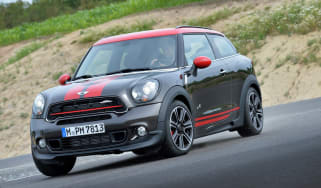 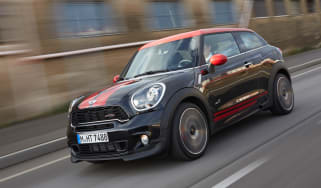