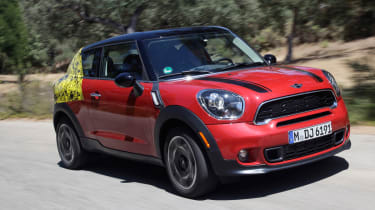 Look at it on paper – or even in the flesh – and the Paceman really doesn't seem all that different to the Countryman. But take it for a drive and the two-door MINI SUV reveals itself to be far more rewarding and far more capable to drive. In fact, it even feels like the fun-factor of the standard MINI hatch, which was disappointingly diluted in the Countryman, has finally been recaptured in the Paceman, and isn't that what MINIs are all about anyway?

The MINI Paceman that we’re driving here in prototype form for the first time is a niche within a niche: a coupe version of the existing MINI Countryman which has lost two doors and gained a lower roofline. It will go on sale in the UK next March and – if MINI’s previous form is anything to go by – it will be a raging success.

Even wearing disguise tape to hide its new back end until it’s officially unveiled at the Paris Motor Show, it’s clear that the Paceman is a smart-looking thing, with a sportier stance than the Countryman. Both cars are identical as far as their doors, but the Paceman gets a shallower windscreen and a coupe silhouette that’s slightly reminiscent of the BMW X6. Mechanically, it’s near identical to the Countryman and is powered by the same range of petrol and diesel engines.

Changes are subtle inside the cabin. MINI hasn’t released any pictures of the interior, but we can tell you that the only noticeable difference over the Countryman is that the electric window switches have moved from the centre console to the doors. Rear seat space is the same as the Countryman – but access past the folding front seats is a bit of a squeeze.

Yet on the road, the Paceman offers a genuine surprise, proving itself to be more than just a three-door version of the Countryman. Chassis settings are firmer than the five-door and it gets a 10mm reduction in ride height, plus retuned power steering. And the result is a car that’s far more rewarding to drive hard with more front-end grip, less body roll and a real enthusiasm for being thrown hard at corners.

The car we tested was powered by the range-topping 184bhp 1.6-litre petrol turbo engine, working with the optional All 4 four-wheel drive system, and although it pulls enthusiastically it never feels quite as quick as the numbers would have you expect. Despite the lack of rear doors the Paceman is just 20kg lighter than the porky Countryman, and power and economy figures are effectively identical between the two cars. That means 42mpg and 157g/km for this model.

Of course, the Paceman’s combination of pace and space isn’t going to come cheap. Official prices won’t be released until nearer the car’s on-sale date next year, but we’re told that the Paceman will cost around £1,200 more than the equivalent Countryman. That’s a pretty hefty premium, although MINI promises that it may well be offset by more standard equipment. The Paceman won’t be offered in anything below Cooper spec – expect to pay around £19,200 for the basic petrol Cooper and up to about £25,850 for the range-topping Cooper SD All 4 Automatic.

Which brings us to the question of why MINI is exploring yet another niche. To which the official response is – pretty much – "why not?" The Countryman already makes up a third of MINI sales in the UK and British buyers seem keen to sample pretty much anything wearing the company’s badge. It’s reckoned that the combination of space and pace is likely to appeal to those who have grown out of the MINI hatchback but who want something different from the Countryman.

And when you compare the Paceman to the Range Rover Evoque Coupe – the only other similar three-door premium SUV in the market - it even looks like relatively good value.