We loved the petrol Cooper S, so now we try hot diesel version of the chunky MINI Paceman 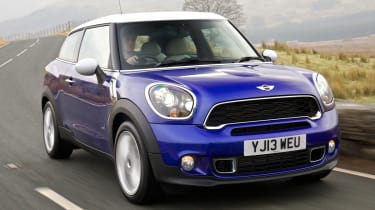 The Paceman recaptures some of the style and fun lost by the Countryman. It feels more like the original hatch to drive, but with a better ride. The strict four-seater interior and price hold it back, but if the Paceman is for you, we’d recommend the Cooper SD for its balance of performance and economy. You can probably do without the four-wheel drive, though.

It's fair to say that the MINI Countryman’s bulbous styling isn’t to everyone’s taste, and its driving dynamics don’t have the usual MINI magic, either. But the two-door Paceman – based on the Countryman – seems to solve both issues. It impressed in hot Cooper S guise, so will the Cooper SD diesel perform just as well?

Our car was fitted with MINI’s ALL4 four-wheel-drive system, which provides useful all-weather ability and a slight improvement in handling and off-road ability. It does cost an additional £1,255, though, so buyers will have to think hard about whether or not they need it – after all, how many Paceman drivers are likely to head off the beaten track?

The 141bhp diesel engine could well be the pick of the range, taking the car from 0-62mph in 9.3 seconds and returning 57.6mpg fuel economy. Admittedly, you’ll never get the frantic rush of acceleration you experience in the Cooper SD hatchback, but it helps the Paceman feel punchy.

There’s a bit of diesel clatter on start-up and a rough engine note throughout the rev range, but it’s by no means unpleasant. In fact, in the mid-range it even begins to sound a bit sporty.

The S and SD models come with stiffened, lowered sports suspension as standard, but our test car had standard springs instead – a no-cost option. The result is a car that has regained some of the hatch’s panache, but also rides quite comfortably. The sports suspension can be a bit jittery, and in our experience it doesn’t necessarily bring enough of a benefit to the handling.

As it stands, the Paceman feels like a great balance between the Countryman’s ride and the hatch’s pin-sharp handling.

As well as being better to drive than the Countryman, the Paceman is better looking. The lower roof sweeps downwards towards the subtle rear spoiler and redesigned back end. The lights are mounted horizontally, there’s a large Paceman badge across the tailgate and twin exhausts set this hot car apart.

The more stylish shape does affect practicality, with access to the back seats a little restricted. Once you’re in them, there’s plenty of room for adults, but the only arrangement in the back is for two rear seats, rather than a bench for three people. Still, the Paceman comes as standard with the centre rail running between the seats, to which you can attach things like a sunglasses case or mobile phone holder.

The sloping roofline means boot space trails the Countryman. With the rear seats in place, the Paceman offers 330 litres; when they’re folded there’s 1,080 litres – the Countryman has 1,190 litres.

And you get less practicality for a higher price, as the £24,160 Cooper SD Paceman is £700 more than an equivalent Countryman. Still, if fun and style are a priority, that could be a price worth paying.