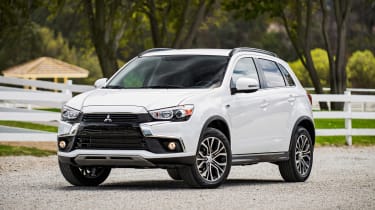 Mitsubishi has revealed facelifted versions of the ASX and Mirage at the 2016 Geneva Motor Show. The ASX small SUV gets brand new front-end styling as well as updates to the trim levels, while the Mirage city car also gets a revised nose, better quality interior plastics and tweaks to the chassis.

The new 2016 ASX ditches the old model’s angular Mitsubishi Lancer-like nose and now gets a totally new front-end, bringing it line with the new Outlander and Outlander PHEV models. It’ll arrive in the UK later this year.

The ASX’s interpretation of Mitsubishi’s new ‘Dynamic Shield’ styling is slightly less dramatic compared to the Outlander, but it still gets a large gloss black panel on the front bumper and plenty of chrome to give a “3D suggestion of motion”, according to Mitsubishi. 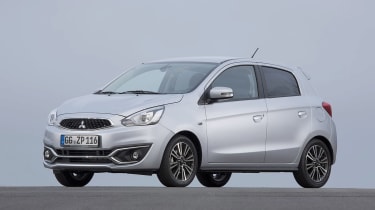 Meanwhile the Mirage city car has also been treated to an overhaul. It too gets a different nose with a wider upper grille, bi-xenon lights and, unusually, a power bulge. To the rear there are different lights and bumper, and there are two new alloy wheel designs and body colours.

Inside the Mirage gets new seat fabrics, a new steering wheel, a few splashes of chrome, DAB radio and an underfloor storage compartment in the boot. All cars also get hill-start assist as standard.

The chassis has been sharpened up, according to Mitsubishi. Thanks to new springs and dampers, the front-end of the car is sharper and there’s less body roll during cornering, and the steering has been tweaked to give more accuracy. It’ll be hitting showrooms in the Spring.

Joining the ASX and Mirage facelifts at Geneva are the eX-Concept. The show car, which was first revealed at the Tokyo Motor Show last year, paves the way for an all-electric SUV that’s set to arrive in the next four years to join the next-generation ASX in the range. Also at the show, Mitsubishi revealed the Outlander and ASX Geoseek concepts.

Welcome to our Geneva Motor Show hub page, scroll down for all our Geneva content...
SsangYong GB in talks to take over Mitsubishi’s UK operations