The Mitsubishi Lancer offers space, practicality and superb value, albeit in a slightly ungainly hatchback package 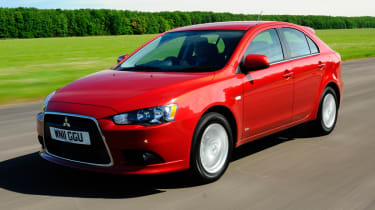 The Mitsubishi Lancer was first launched in 1973, and is now in its ninth generation. This is the first Lancer to be sold as a hatchback since the fifth generation was unveiled in 1988, and is one of the most practical models in the firm’s range. The Lancer takes styling inspiration from the fire-breathing Evo X model, but it but battles against more practical value for money competition like the Skoda Octavia and Chevrolet Cruze. A roomy cabin, generous standard kit and an inclusive service plan make it more competitive than it might first appear.

If you’re looking for a Mitsubishi Lancer that is fun to drive, then you should focus your attention on the Evo X models. The standard hatchback, whether fitted with the 2.0-litre diesel or 1.8-litre petrol engine, suffers from excessive body roll. Worse still, the stiff suspension means the Lancer crashes over anything but a perfect surface. And although the diesel is relatively economical, it’s noisy, while the petrol lacks the urge of its oil-burning brother. Short gearing helps boost acceleration, but the imprecise change doesn’t encourage you to swap between ratios.

A fixed-price servicing plan means Lancer servicing ranges from £400 to £500, depending on the model chosen, and covers the car for three years and the first 37,500 miles. However, the 1.8-litre petrol engine is only available with an automatic gearbox and chucks out 191g/km of CO2, while the six-speed manual diesel emits 163g/km. The end result is annual road tax bills that are much higher than its competitors. At least the diesel is economical, with a combined economy of 45.6mpg, and all models are relatively well equipped.

The Mitsubishi Lancer shares its basic chassis and bodywork with the Evo X super saloon, but it's fair to say that the Lancer hatchback is less pleasing on the eye than the four-door version. Up front there’s the aggressive grille and lights seen on the Evo X, and at the rear the large roof-spoiler adds sporting flair, but these elements fail to hide the awkward proportions. It’s certainly not as visually pleasing as the Chevrolet Cruze hatch. The cabin’s neat design makes up some lost ground, yet the quality could be better, being leagues away from the soft-touch plastics found in the Skoda Octavia, and the dated switchgear is a disappointment.

Despite being a hatchback, the Mitsubishi Lancer doesn’t have as large a boot as you may expect – with the seats in place there’s only 344 litres available. Things improve when the rear bench is folded flat, as space increases to 1,349 litres. That’s still 241 and 104-litres down on the space available from the Skoda Octavia hatchback. Still, the Mitsubishi Lancer does boast plenty of rear legroom and the large glass area means visibility is good. 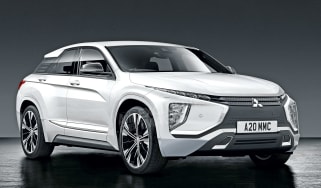 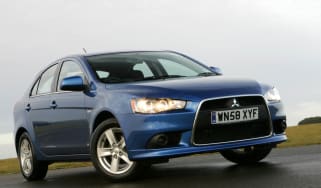 The Lancer has finally got five-doors, but is it good enough to beat tough competition such as the Ford Focus and Honda Civic?
Mitsubishi Lancer Sportback vs SEAT Leon 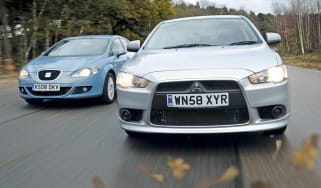 For the first time ever, Mitsubishi is offering its Lancer as a five-door. Does the new Sportback make sense? We find out as it tackles SEAT’s latest …
Mitsubishi Lancer review (2000-2008) 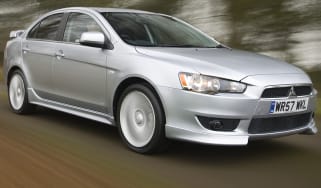 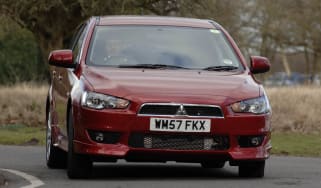 The wild Evo X gets all the attention, but the entry-level model shouldn't be overlooked.
Mitsubishi Lancer Evo X review 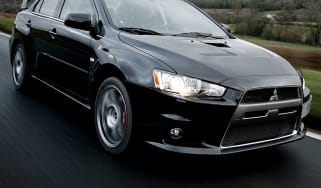 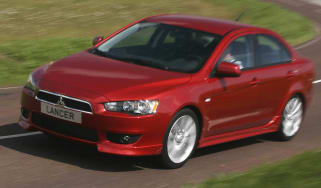 Latest Lancer a big improvement over the old model. But will is it a recipe for success?
Mitsubishi Lancer 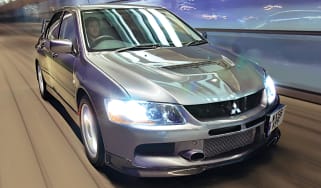 Fans will love the Evo's raw power and performance. It is pricey, though...
Mitsubishi Evo 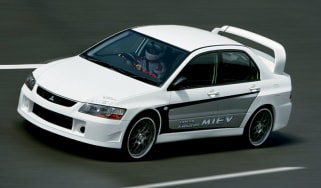 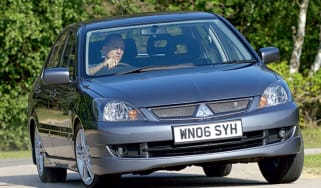 Mitsubishi launches Lancer that is wingless and non-turbo - the £11,500 Sport
Mitsubishi Evo 2007 review 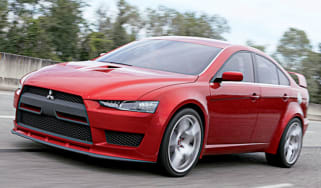 Mitsubishi's next-generation Lancer, the Evo X, won't be here until late 2007. We found out if it's worth the wait
Mitsubishi Evo 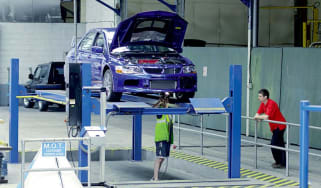 There has been something rumbling deep in the belly of the Auto Express underground car park over the past few weeks... and it's the unmistakable soun…
Mitsubishi Lancer Elegance auto 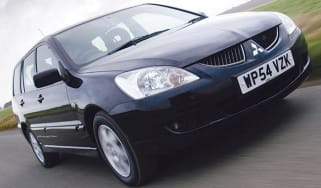 With its huge rear wing, Mitsubishi's Lancer is something of a legend to UK buyers with an eye for performance. The rally-replica Evo VIII has spawned…
Skip to HeaderSkip to Content