The wild Evo X gets all the attention, but the entry-level model shouldn't be overlooked. 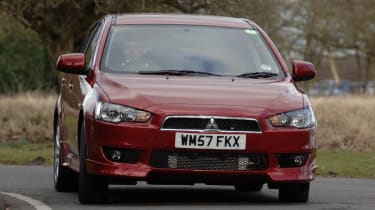 While the latest Evo X steals the headlines, the standard Lancer is the real surprise. As well as being a great family car, it shares the same strong styling and keen dynamics of its high-performance brother, and the economical 2.0-litre diesel engine adds to the appeal. The Mitsubishi is a big improvement over its predecessor, and offers a genuine, interesting alternative to mainstream family cars.

Living in the sha­dow of a more successful brother is not much fun – as racing driver Ralf Schumacher knows.

The previous Mitsubishi Lancer suffered a similar problem. While the turbocharged four-wheel-drive Evo variant enjoyed a fanatical following, the standard car faded into the background. However, the Japanese firm plans to change that by ensuring its latest Lancer has a closer association with the more powerful flagship.

That is immediately apparent from the newcomer’s looks – there’s much more cohesion between the two variants. The Lancer shares the aggressive styling of its illustrious stablemate, and many of the sporty details, too.

All models come with stylish alloy wheels and a rear spoiler, along with the distinct­ive grille. We drove the four-door sal­oon version, although a five-door hatch – badged the Sportback – will also be available from the summer. This will form the basis for a 240bhp Ralliart hot hatch special edition due later in the year.

Until then, engine choices comprise a 1.8-litre petrol and a Volkswagen-sourced 2.0-litre diesel – and it’s the latter which really impresses.

The same unit is used in Mitsu­bishi’s Grandis and Outlander, so it’s not the newest engine around. But it packs a strong punch and gives the Lancer decent pace. Due to excellent noise insulation, it’s quiet on the move and the usual bugbears about diesel clatter and a lack of refinement aren’t applicable here.

The oil-burner is mated to a six-speed transmission that’s great to use, thanks to a short and positive shift. It’s not the same gearbox as in the Evo, which gets a five-speed unit, but it’s every bit as slick. Engineers have clearly tried hard to give the Lancer a sporty feel from behind the wheel, and the results are impressive. On twisting B-roads, the well balanced chassis and agile nature make it fun.

It’s sure-footed, and there’s plenty of grip, while body roll is kept in check through the bends. The trade-off is a rather firm ride, although it’s far from crashy, and deals with rough surfaces competently enough.

Big improvements have been made to the cabin. Build quality is good, if not quite up to class-leading stan­dards, while the controls are simple, attrac­tive and well organised.

There’s decent room inside, especially for rear passengers. But what will really appeal are the competitive prices and generous equipment. When the five-door model arrives, it will start at £12,499 for the 1.5, while the diesel costs from £15,499.

RIVAL: Volvo S40 2.0D This was one of the cars that Mitsubishi used as a benchmark for its new model. The S40 has the edge on quality, but can’t compete with the Lancer’s generous kit.