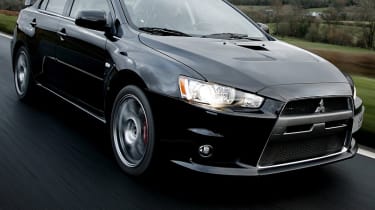 Driving If you’re thinking the Evo isn’t as hardcore as it once was, you’d be right. From the word go it feels more refined, secure, solid and stable. Noise levels are lower - although tyre roar remains excessive – and it’s a much easier car to live with on a daily basis. But the Evo’s real genius lies in its suspension. The ride is no longer crashy, and although not plush ether, it never jars or jolts, unlike some rivals. It has been perfectly honed. There’s barely any roll or suspension movement, yet we can’t think of another car that glides as effortlessly or flows better over rough roads. It’s also beautifully balanced, has a sublime 4WD system, scalpel-shape steering and stunning body control. In contrast, the engine is a bit of a disappointment. It is more muted than before, sounding flat and dreary, and isn’t as explosive as it once was, either. We also found the SST semi-auto acted more like a fast automatic than a snappy manual.

Marketplace One thing hasn’t changed with the latest hot Lancer – Mitsubishi’s liking for long and convoluted names. Luckily, simply uttering the words ‘Evo X’ to any car enthusiast will suffice. Offered in standard 290bhp 2.0-litre turbo guise, as the FQ-300, the company also sells faster FQ-330 and FQ-360 variants. Also now available, alongside the five-speed manual, is a twin-clutch semi-auto. This SST is only available in top-spec GSR trim (and expected to take two in every three sales), while the manual also comes in a cheaper GS version. Its obvious rival is the Subaru Impreza STi, but we found this disappointing. Mitsubishi would rather put the Evo X up against the Audi A3, BMW 335i – even the Porsche Cayman and other focused performance machines.

Owning Although better than the old Evo IX, the interior remains rather uninspiring. OK, the hooded dials look good and the small-diameter steering wheel is lovely to hold, but cast your eye around and you’ll notice the cheap plastics, nasty dial lighting and downmarket switchgear. Even though it’s well assembled, the Evo X is a long way from luxurious. And although rear seat space is generous, the shallow boot doesn’t look anything like as big as the 400 litres Mitsubishi claims, plus there’s no split-fold option. This is because Mitsubishi wanted to strengthen the frame as much as possible – it’s 56 per cent stiffer than the old Evo IX. It is also very well equipped, with the GSR having standard sat nav and a 30Gb music hard drive. It also has far longer service intervals of 10,000 miles, plus an optional service plan that covers you for 30,000 miles of motoring for a one-off payment. One thing that hasn’t changed is the engine’s thirst, though. We averaged 17mpg (and one tank saw us record less than 10mpg!), and a modest 55-litre tank means you’ll be filling up every 200 miles. Retained values are also not in the premier league, insurance costs are predictably high and overall running costs are steep as well.