Fans will love the Evo's raw power and performance. It is pricey, though... 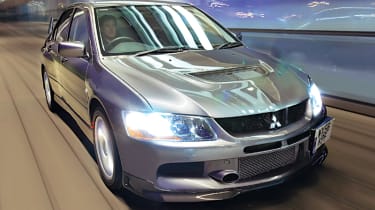 The last-of-the-line Evo IX is an amazing machine, and the changes made to the suspension have resulted in the most usable model yet. Fans will love it. But it’s expensive, and for most buyers, the standard FQ-300 offers more than enough pace. With the whole range feeling its age – the cabin is cheap, and refinement could be a lot better – we can’t wait for the new model, which promises to be even more of an all-rounder.

The countdown has begun. There are now only 12 months to go until the launch of Mitsubishi’s Evo X – the all-new, next-generation version of the maker’s legendary rally-inspired, four-wheel-drive super-saloon.

So with the current car bowing out, Mitsubishi has given it one final tune-up to create the ultimate Evo IX. Called the Lancer Evo IX MR FQ-360, it has the firm’s most potent engine, aerodynamic styling tweaks, suspension updates and interior extras.

As the name suggests, this Evo packs a considerable punch. Thanks to the latest new turbocharger, fresh ECU and a modified exhaust system and intercooler, the 2.0-litre four-cylinder pumps out 366bhp at 6,887rpm and peak torque of 492Nm at 3,200rpm.

And it’s not only the engine that has been tweaked. New springs lower the car 10mm at the front and 5mm at the rear, while the Super Active Yaw Control system – which distributes torque between the four wheels – is improved for greater traction.

There are some visual changes, too. In the search for better high-speed stability, in comes a new carbon fibre spoiler at the front, while ridges on the rear window also help reduce lift. New 11-spoke alloys and automatic headlights complete the exterior up-dates. Inside, there’s tinted rear glass, while the Recaro sports seats have been redesigned and feature IX MR logos. Plus, the dashboard is now clad in piano black trim, and there are new aluminium door sills, too.

But what about the performance? Well, the on-paper figures are amazing. The benchmark 0-62mph sprint takes only 3.9 seconds, while the top speed is limited to 157mph. And it is just as rapid as the statistics suggest.

With the exception of a few £100,000-plus supercars, nothing on the road feels as fast as the Evo IX MR. On-boost acceleration is searing, and above 5,000rpm punch is much stronger than on other Evo models.

But the engine is also more tractable, pulling hard from low revs in a high gear. The suspension tweaks have proven successful, too, and while the ride is firm, the IX MR is far more compliant than predecessors.

It offers superb traction as well. All of the 366bhp is fed directly to the tarmac and with limited body roll, lightning direction changes and positive steering, the IX MR is great fun. What’s more, the Brembo brakes offer super pedal feel and stopping ability.

So is it worth the extra over the base FQ-300? Well, if you’re after an exclusive machine, you won’t be disappointed. But the entry-level Evo is almost as enjoyable. And with the 10th generation model just around the corner, we would recommend that you save your money until 2008.