Latest Lancer a big improvement over the old model. But will is it a recipe for success? 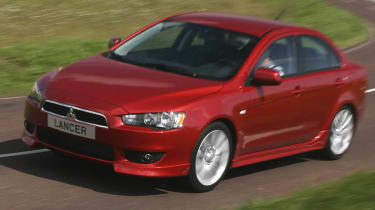 Distinctive styling, decent dynamics and the promise of competitive pricing make the latest Lancer a big improvement over the old model. Only its limited engine line-up and low-rent cabin let down an otherwise impressive package. The high-performance Ralliart and Evo X variants will steal the limelight, but the mid-range models now deserve a look, too.

If Mitsubishi trained chefs instead of building cars, the firm’s signature dishes would surely be turbocharged curries.

The hot Evo line-up has been a smash hit for the firm, but buyers after something milder have been poorly catered for – until now. The all-new Lancer is designed to redress the balance, so how do lesser versions of the family saloon rate?

Clearly the brand is keen to tap into its sporting heritage, because the exterior of our 2.0-litre diesel test car has taken its design cues from the flagship Evo X. There’s no rear spoiler and the upper section of the front grille features chrome trim, but the boxy saloon shares the purposeful and distinctive look of the all-wheel-drive range-topper.

The interior is also an improvement on that of its bland predecessor, and the driver gets a pair of neat Alfa Romeo-style instrument dials. However, the switchgear is cheap and the simple cabin still fails to match the best European rivals.

But the saloon is 10cm longer than a Volvo S40, and rear space is good – you also get a decent boot. Build quality is solid, although the hard plastics in the cabin are accompanied by two traditional failings of Japanese cars. There’s no reach adjustment on the steering wheel and only stepped increments, rather than a smooth movement, of the seat backs.

On the road, the diesel engine, which is sourced from VW, is a noisy companion. It has to be worked hard to extract performance, and there’s surprisingly little low-down urge. The pre-production test cars could also do with some additional sound insulation before they reach showrooms, because that would greatly improve high-speed refinement.

Engine aside, the Lancer is good to drive. All UK cars will be fitted with Mitsubishi’s sports suspension set-up, which is firm without compromising ride comfort. Body roll is tightly controlled in bends, and there’s plenty of grip. The accurate steering is well weighted, while the standard six-speed manual gearbox is both light and positive.

When the Lancer arrives in UK showrooms, its line-up will include an entry-level 108bhp 1.5-litre petrol car and a 236bhp 2.0-litre turbo Ralliart model with four-wheel drive. Neither was available for us to drive at the car’s launch, but we did try the 142bhp 1.8-litre petrol model. It delivers lively performance if you use all of the revs, and is well suited to the sporty front-wheel-drive handling.

As if that wasn’t enough, a practical hatch, called Sportback, is set to join the Lancer line-up next summer, adding even further tasty appeal to Mitsubishi’s family car menu.

Rival: Subaru Impreza 2.0 The hot Impreza has four-wheel drive – but there’s no diesel, the styling is bland and fuel economy poor. That makes the new Lancer the more attractive proposition.