The Lancer has finally got five-doors, but is it good enough to beat tough competition such as the Ford Focus and Honda Civic? 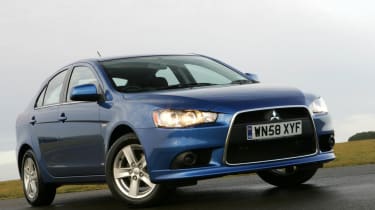 Styling/Image The jet-fighter grille of the Lancer looks great on the rally bred Evo – and it looks smart enough on the new Sportback too. The problems with the more practical hatchback start at the back, where the new rear end looks heavy handed. The bulbous tailgate is also at odds with the angular front end so the Lancer struggles to match its mainstream rivals for kerb appeal.

Interior/Practicality Much of the interior is carried over from the saloon, which is a mixed blessing. The clean dashboard is simple and tidy, but it lacks the quality of its European rivals and some of the switchgear, most notably for the ventilation, feels very low rent. There’s decent rear legroom but taller passengers will find the ceiling is too low. The boot is more successful. A simple lever folds the rear seats in a single action and a split-level floor provides a flat load area once they’ve been dropped.

Engine/Performance Engine options are limited, with buyers restricted to a 1.8-litre petrol or a VW derived 2.0-litre diesel. The 141bhp petrol is smooth and refined but with only five gears to play with, it’s a busy motorway companion. It powers the Sportback from 0-62mph in 10.4 seconds. The 2.0 DI-D diesel is faster and more economical, delivering 44.8mpg on the combined cycle. However, it can’t match the best family car rivals when it comes to refinement or outright punch.

Driving experience There’s nothing to object to from behind the wheel but, equally, there’s little to worry the class leaders either. The ride is smooth and the handling is well balanced – as you would expect from the firm responsible for the incredible EVO models. The package is let down by disappointing brakes and numb, over-light steering. It doesn’t engage with the driver enough for enthusiasts and lacks the finesse of the lithe Ford Focus or Honda Civic.

Ownership Costs This where the Lancer makes most sense because it provides undeniable value for money and strong aftersales back-up. Included in the package is an unlimited mileage warranty, three-years of roadside assistance and competitively priced pre-paid servicing. However, fuel economy is merely average in petrol guise and high CO2 emissions also make road tax expensive.

Safety/Environment With seven airbags the Mitsubishi scores well for passive safety features, but ESP isn’t even an option in GS2 trim, which counts against it. Higher spec levels include the safety feature as standard but it should really be fitted across the range in this family focused sector. High CO2 emissions for the petrol of 188g/km harm its green credentials, but the 2.0-litre diesel emits just 165g/km. Both models are built in Europe at Mitsubishi’s Dutch NedCar plant.