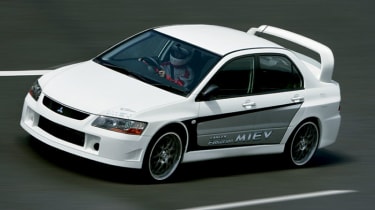 Mitsibushi's Lancer Evo MIEV prototype may be a bit rough around the edges at the moment, but it does point to a bright future that’s filled with perky, fun, electric-powered sports cars which produce no harmful emissions. If the manufacturer can just sort out the harsh ride – and adapt its ACD and AYC traction control magic to the MIEV’s requirements – then we’ve really got a lot to look forward to.

Listen up! This four-wheel-drive rally supersaloon might be one of the quickest cars on the road – but it doesn’t have to shout about it...

In fact, the loudest things about this very special Mitsubishi Evo are its radical paintwork and aggressive looking bodywork. That’s because it runs on electricity. And, under full throttle, only the whirr of electric motors and the tyre noise are audible.

Even so, the new Lancer Evolution MIEV (short for Mitsubishi In-wheel motor Elec­tric Vehicle) still powers from 0-60mph in 6.9 seconds and has a top speed of 115mph. And it’s important to bear in mind this is no crazy aftermarket project – it’s a fully paid-up part of the firm’s plans for performance cars in the near future. The MIEV, tipped to hit the road within four to five years, looks like a standard Evo with big wheels. But pop open the bonnet, and you’ll soon realise that this is a very different beast.

For a start, where there should be a turbocharged powerplant, there’s nothing. Apart from a backpack-sized computer control box by the bulkhead (there’s another identical one in the boot), the engine bay is deserted. To find the true source of the Evo’s performance, you need to peek behind the 20-inch BBS alloys.

Concealed inside each wheel is a powerful electric motor. Producing 50kW each, or 200kW in total, they develop the equivalent of 270bhp.

But that’s only half the story, be­cause it’s not just the power output that’s impressive – the electric Evo also generates 518Nm of torque. And although the car’s range stands at a mere 150 miles on a single charge, the torque helps you forget this. During our brief time in the car, we found the steering light but responsive, while the throttle was heavy but progressive, offering instant, effortless acceleration.

With electric cars, there is no transmission loss; just lightning-fast throttle response. That takes a while to get used to, as does the lack of noise.

Due to the low-profile 20-inch Dunlop SP Sport Maxx rubber and the big wheels, the ride is harsh, but it’s expected these will be downsized in the future to deliver more refinement.

The brakes are very powerful, helped no end by regenerative braking. And if you’re going to ask about the Evo’s masterful 4WD technology, or the tricky ACD (Active Centre Differential) and Super-AYC (Active Yaw Control) systems, don’t bother. They don’t exist – at least, not on the MIEV. Mitsubishi is working on that one: “This will all come later,” said our source.

While this electric technology will eventually be fitted to a production Lancer, we can expect to see a smaller version of Mitsubishi’s first production electric car much sooner. It will be in the form of the i MIEV supermini, due to go into production by 2008.

As for the Evo MIEV, our test car is clearly an early prototype. While the hardware will be updated and further developed, the current body will soon be replaced by the sleeker next-generation Evo, due in the middle of next year. And, by the time the MIEV is ready for the road, we can expect to see the Evo go through at least two, maybe three facelifts, taking us to a tentative launch date of 2010 and beyond.