Mitsubishi's next-generation Lancer, the Evo X, won't be here until late 2007. We found out if it's worth the wait 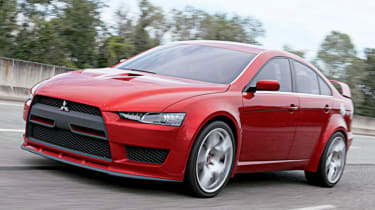 The Evo has always been a superstar in the highperformance car world, and the next incarnation looks set to elevate its already lofty status. On the basis of our test, it will have the ability to make even novice drivers feel like rally champions. An all-wheel-drive system, along with uprated brakes, will ensure the Mitsubishi is a match for the all-new Impreza.

After nine generations, the Mitsubishi Lancer has proved the theory of evolution! Ever since the first Evo was launched in 1992, the Japanese firm's performance flagship has become the devastatingly fast saloon we know and love - but a quantum leap is just around the corner.

We've already seen the Concept-X, which shows how the next-generation rocket will look, but now Auto Express can go one better. Thanks to a world exclusive test drive in a development mule, we can tell you how the Evo X will perform - because we've sampled technology that won't arrive in showrooms for at least 18 months.

Through the snow-covered slalom course laid on for our test, these innovations made the prototype even quicker than the current car. A more composed rear end happily follows the line traced by the front wheels, while the inputs required are reduced.

Better still, the steering remains as natural and progressive as on the Evo IX, and enthusiasts will be pleased to hear that the hi-tech systems cannot totally restrict slides. The new braking set-up only interrupts when you've exhausted the limit of the S-AWC's ability to maintain traction, so when you've finished having fun, bringing the Lancer back into line is easier than before.

Further adjustments before the car arrives in UK showrooms will result in even sharper turn-in and more precise steering, guaranteed to make the X the best Evo yet! When it does go on sale, expect the Lancer to offer the option of a six-speed automated manual transmission with race-style paddleshifters.

Inside, the new cabin will be a huge improvement over the current model's. Higher-quality materials will feature, and there will be more equipment, including an on-board multimedia system. Not only will this display details about the in-car entertainment and sat-nav, its screen will also show real-time information on the status of the S-AWC system.

Buyers will have to wait until the end of 2007 for the Evo X. It's set to carry on where the old car left off, with handling and performance to shame models twice the price. We can't wait.

The technology that helps X-rated Lancer get a grip

The radical Concept-X got rave reviews when it was unveiled at last year's Tokyo Motor Show - and Mitsubishi aims to back up the looks with a 4WD system which is second to none.

Our test mule may resemble an old Evo VIII, but don't be fooled; underneath, it's pure Evo X. With the revised Active Yaw Control (AYC) and braking set-up, it's a brilliant driver's machine.

AYC features extra capacity and improved responses. Together with a newly developed Active Centre Differential (ACD), it channels torque distribution between the rear wheels to the side which needs it most.

Meanwhile, the new Active Brake Control(ABC) system can supply a braking force to each wheel to stop slides and sideways movement.