Mitsubishi launches Lancer that is wingless and non-turbo - the £11,500 Sport 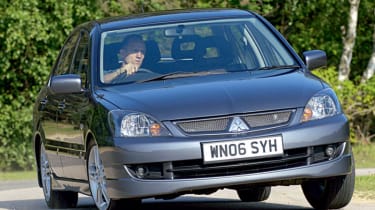 The Mitsubishi Lancer Sport is not a patch on the Evo. However, if you can manage to banish all thoughts of the turbocharged flagship from your mind, the Sport remains a keenly priced and honest saloon. Its beefy bodykit will not be to everyone’s taste, but decent performance and a host of sporty extras should ensure that it continues to have plenty of appeal.

It might come as a shock to some, but UK drivers can buy a Mitsubishi Lancer that offers something other than big wings and turbochargers. For fast saloon fans, the existence of the basic Lancer sounds like a motoring travesty. Its 2.0-litre, non-turbocharged unit has only a third of the power offered by its famous brother, and the car takes nearly 10 seconds to cover 0-60mph.

But then it costs almost £20,000 less than the Evo, too, making it about a third of the price of its stablemate. So is the driving excitement also reduced by a similar margin?

The Japanese company has offered a non-boosted version of the Lancer since 2004, but with the focus on value for money, this variant never had much in common with the rally-bred range-topper. In an effort to bridge the gap between the mundane and the menacing, the brand has now added a Sport model to the line-up.

The first hurdle it has to overcome is the styling. While the high-performance machine’s edgy lines and beefy bodykit provide plenty of aggression, standard Lancers are different thanks to a softer headlamp shape and a more rounded rear. To sharpen up the look, the Sport model gets a deeper front bumper, a large rear spoiler and neat alloys. But from some angles, it appears as if it’s wear­ing an aftermarket bodykit.

Inside, there’s less to separate the two variants. Both have similar dashboards, with only the less extreme seats giving the game away. It’s not the most modern cabin design in its class, but it is very well built.

With an old-fashioned four-door layout, the practicality of the model is limited. However, the Lancer Sport is also available as an estate. Under the bonnet, both versions rely on a natur­ally aspirated 2.0-litre four-cylinder motor, which delivers brisk, if unremarkable, performance.

Power is fed only to the front wheels, and the sprint from 0-62mph is completed in 9.6 seconds. A top speed of 127mph confirms the Lancer’s ‘warm’ credentials, but if you want to make swift progress, you have to work the engine hard. Maximum torque only arrives at 4,500rpm, and as a result the driver ends up making plenty of shifts, which prevents relaxed progress.

When the road becomes twisty, the Lancer lives up to its name and delivers a surprisingly sporty experience. It lacks the composure and ability of a Ford Focus, but it’s eager to turn into bends and has plenty of grip. When you see the price, it makes even more sense: at £11,524, the Sport costs only £775 more than a 1.6 manual Lancer, and is £1,800 cheaper than a similarly equipped 1.8-litre Focus.

In terms of thrills, this basic saloon isn’t on the same plane as the Evo, but that doesn’t make it a failure. The Lancer Sport is cheap, and it is sure to leave you feeling more cheerful than other models in the non-turbo line-up.