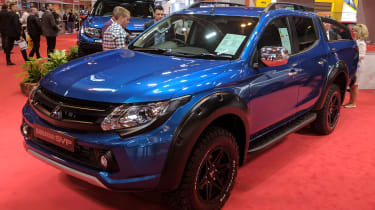 SVP stands for Special Vehicle Projects, and the first Mitsubishi to receive the SVP treatment is the L200 pick-up truck. Called the L200 Barbarian SVP, it’s a tweaked version of the standard L200 Barbarian Double Cab and will be limited to 250 units. 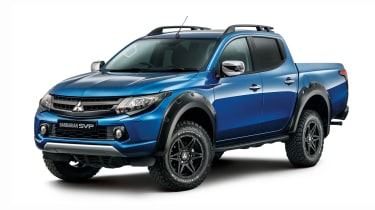 The SVP fettled L200 Barbarian features a number of new parts and styling additions to make it stand out and appear more aggressive. New black 17-inch six-spoke wheels are wrapped with knobbly BF Goodrich tyres, and are housed underneath chunky looking black wheel arch extensions. At the front it spawns a new black grille, and the headlights and taillights also get new black housing. The fog lamp surrounds, roof rails and the rear bumper are all finished in black too. Finishing off the new look are ‘shark-fin’ style side steps and SVP badges.

In terms of equipment, the L200 Barbarian SVP comes with an illuminated pick-up bed, puddle lamps, Bi-Xenon headlights with LED daytime running lights and a soft opening tailgate. Inside, sat nav is included as standard, while buyers also get Bluetooth, keyless entry, a reversing camera, cruise control plus rain and dusk sensors.

Leather seats with suede inserts also come as standard alongside foot well ambient lighting. Each of the 250 vehicles will be assigned a production number, which will be stitched into the headrests.

In terms of power, a 2.4-litre turbodiesel 4-cylinder producing 178bhp is found under the bonnet. Power is sent to all four wheels via either a six-speed manual gearbox or a five-speed automatic. Available in either black or blue, the L200 Barbarian SVP is on sale now, priced from £28,479 excluding VAT.

What do you think of the L200 Barbarian SVP? Let us know in the comments.