It’s cheap to run and lavishly equipped, but the Mitsubish Mirage’s ride and handling is disappointing and it’s pricey too 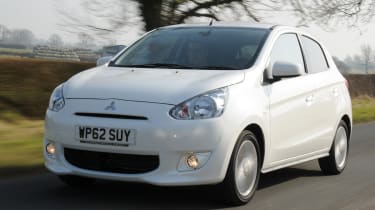 Drivers looking for a decent city car are spoiled for choice these days, and that’s not particularly good news for the Mitsubishi Mirage. The Mirage replaced the Colt in 2012 and thanks to relatively stiff pricing, poor dynamic performance and cheap feeling interior, faces awkward questions from a range of rivals that starts with the cut-price Dacia Sandero, and includes excellent city cars like the VW up!, Skoda Citigo, Kia Picanto, Hyundai i10 and the Toyota Aygo. The Mitsubishi Mirage also treads on the toes of more expensive superminis such as the Ford Fiesta, Skoda Fabia and VW Polo at the lower end of their line-ups.

In its favour the Mirage isn’t too bad to look at, though it’s fairly generic and lacks the pizazz of more stylish rivals such as the Picanto. The interior isn’t great though, with a cheap look and feel that rivals knock spots off – although it’s fair to say the Mirage spec is generous and that redresses the balance somewhat.

Mitsubishi offers the Mirage with a 1.2-litre three-cylinder petrol engines which offers enviable economy to owners who are sufficiently immune to the pleasures of driving to disregard the vague steering, roly-poly handling and crashy suspension around town.

The Mirage comes in only one trim spec called the Juro, but you can choose to upgrade to leather upholstery, and choose a CVT automatic transmission in place of the regular five-speed manual.

With its lightweight construction and compact dimensions, the Mitsubishi Mirage should deliver eager performance and nimble handling. However, the 79bhp 1.2-litre three-cylinder engine feels strained and breathless when extended, plus it suffers from an uneven power delivery - the Skoda Citigo and Suzuki Swift are smoother and perkier. 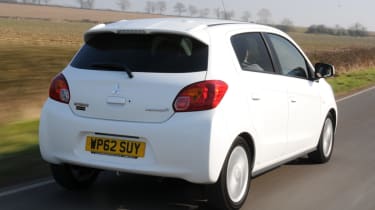 Yet it's the Mirage's lacklustre handling that is the biggest cause for concern. The steering is lifeless and slow to respond, there's lots of body roll and very little grip, meaning the Mirage lurches disconcertingly from corner to corner. It also trails its class rivals for refinement, with road and wind noise becoming intrusive on the motorway. Around town the Mirage crashes into potholes and thumps over expansion joints, and the ride only settles down on the open road.

On paper, the new three-cylinder engine design helps make the Mitsubishi Mirage one of the most economical cars in its class. When combined with the 845kg kerbweight, aerodynamic design and standard stop-start system, the 1.2-litre unit promises to return 68.9mpg when fitted with either the standard five-speed manual or optionl CVT automatic. 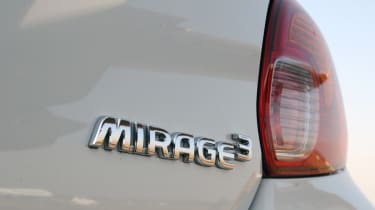 You can also purchase a decent value pre-paid servicing pack, which takes care of maintenance for three years and 36,000 miles. It's not all good news, though, as the Mitusbishi Mirage isn't exactly cheap to buy. Not only is it undercut by the Dacia Sandero, it's also more expensive than the much classier and more composed Skoda Citigo.

The Mitsubishi Mirage replaces the Colt in the Mitsubishi line-up, and dispenses with the old car's upright design in favour of something more rounded. Yet while the slippery shape delivers a class-leading drag coefficient of 0.27Cd, it lacks the stylish and modern looks of the Kia Picanto.

There's just one model, the Juro, which gets colour coded bumpers and door handles and a sporty tailgate spoiler, 14-inch alloy wheels and front fog lamps. The generous specification continues inside, where you'll find electric windows, a USB connection and a simple trip computer. 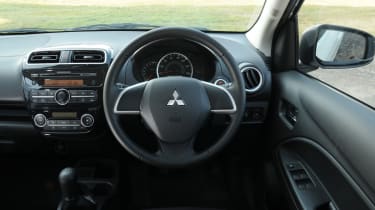 You'll benefit from big car features such as climate control and keyless entry. Sadly, none of this desirable kit can disguise the extremely cheap feeling materials and uninspiring design. It's solidly screwed together at least, although it comes nowhere near rivalling the VW up! for upmarket appeal.

The Mitsubishi Mirage has 235 litres of boot space, which is a big improvement on the Colt's 160 litres. Yet it's a lot less than the VW up!'s 251-litre capacity and only 10-litres more than the Hyundai i10. And although this figure grows to 600 litres with the 60/40 split rear seats folded, the Mirage still can’t match the five-door up!’s 959 litres.

The Mitsubishi is also hobbled by a high loading lip, which makes it tricky to lift heavy items in and out. Unlike the Skoda Citigo or SEAT Mii, the Mirage is a five-seater. However, occupants in the back get no more head and legroom than other city car rivals, while the flat rear bench is a little uncomfortable. Still, there's a decent amount of storage in the cabin, with a number of useful cubbies and cupholders.

Mitsubishi has an excellent reputation for reliability, so the Mirage should prove dependable and sturdy. However, it's worth noting that Mitsubishi finished in a disappointing 19th place in our 2012 Driver Power customer satisfaction survey. And while all versions are backed by a three-year unlimited mileage warranty, you get more peace of mind from the lengthy guarantees offered by Hyundai and Kia. The Mirage scored just four stars overall in the 2013 Euro NCAP crash test, however all versions get a stabiity control system, six airbags and a pair of ISOFIX mountings for the rear seat.

Mitsubishi Mirage given new look as part of 2020 facelift 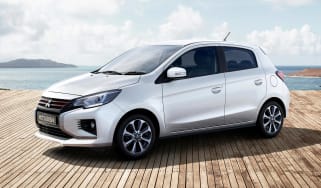 Mitsubishi Mirage given new look as part of 2020 facelift 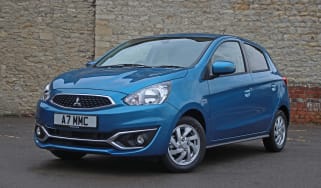 Mitsubishi Mirage updated for 2019 with lower base price 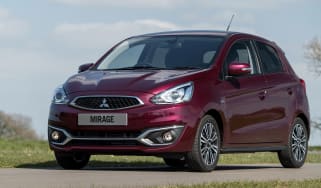 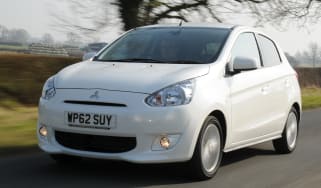 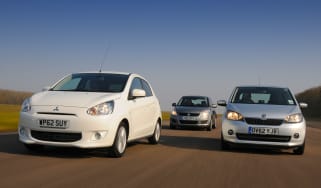 We test the all-new Mitsubishi Mirage against two great-value rivals, the Skoda Citigo and Suzuki Swift
Skip to HeaderSkip to Content