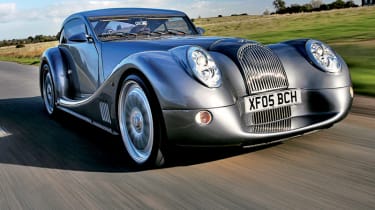 If you thought the British car industry was in trouble, think again! The Morgan AeroMax is a joy to drive, and the level of craftsmanship at your fingertips makes the coupé feel as special as it looks. That’s just as well, because it’s far from cheap. But you do get an exclusive motor that can rival Ferrari’s entry-level models in visual drama, if not quite in performance terms.

When Batman is getting ready to order his next car, he may want to drop in on Morgan. For the first time ever, the British manufacturer has come up with a machine which – complete with its jaw-dropping Batmobile-style rear end – could be a genuine rival to legendary models from Italian super­car brands Ferrari and Lamborghini.

Auto Express is the first magazine in the world to get behind the wheel of the AeroMax. But has the maker, based in Malvern, Worcs, really got a contender that can steal buyers from the F430?

It’s certainly exclusive enough. The AeroMax was first commissioned by a Morgan fan called Prince Eric Sturdza. But while the model was conceived as a one-off, the company was looking at ways to expand – and decided to build an exclusive production run of 100 in time to go on sale in 2008.

Essentially an Aero 8 with a roof, the AeroMax shares its aluminium-bonded monocoque suspension set-up and meaty BMW V8 powerplant with the roadster. But as with more recent versions of the drop-top, this latest model is 6cm wider than the original Aero 8, and has had its controversial bug-eye headlamps moved round to a slightly more conventional position.

The end result is a stunning machine that convincingly carries off the modern take on a classic design, and offers eas­ily as much head-turning appeal as a Ferrari. Slip inside, and as is the case with the exterior, the AeroMax’s cabin serves up an interesting combination of traditional and hi-tech.

The beautiful dashboard top is carved out of a solid chunk of ash. This is in total contrast to the array of modern gadgets included, such as the state-of-the-art tyre pressure gauge set on the facia. Predictably, there’s nothing old-fashioned about the way the Morgan drives, either. It’s very stiff, and the metal ball-jointed suspension has enabled the engineers to opt for soft springs.

The result is a ride that’s remarkably comfortable over bumps despite the standard 20-inch alloys. What’s more, the steering is very well tuned, reinforc­ing the capabilities of the chassis and suspension by offering plenty of feedback. Adding to the driver appeal is an excellent seating position: you sit with your legs straight, if a little offset in this left-hand-drive model, while the steering wheel is bor­rowed from Aston Martin. Although it’s grown a fixed roof, the AeroMax still tips the scales at a relatively lightweight 1,150kg, so it feels nimble with that meaty BMW V8 up front, driving the rear wheels. At idle, the engine sounds great through the side-exit exhausts.

Once on the move, the sound disappears, drowned out by the slightly over-intrusive road and wind noise. Still, the engine provides plenty of acceleration. Peak pulling power is available at 3,600rpm, which means there’s plenty of thrust in every gear.

Performance figures have yet to be announced, but a maximum speed in excess of 170mph puts the AeroMax into supercar territory. The sprint from 0-60mph is likely to take around 4.5 seconds. The only real question mark remains over the final price.

Asking £110,000 for what is essentially a £62,500 car with a roof seems cheeky. However, Morgan isn’t worried – the company has already sold a third of the 100 examples that it will build.