Vespa’s new electric scooter, the Elettrica, is silently gearing up to corner the e-scooter market 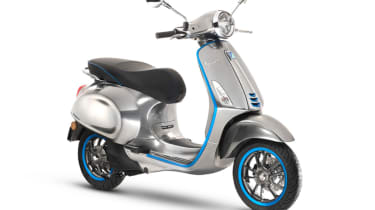 The Piaggio Group, which manufactures Vespas, will be delivering the electronic version of its iconic scooter called the Vespa Elettrica, in 2018. The electric scooter, or e-scooter as they are sometimes known, is claimed to produce 2kW (2.7bhp) of continuous power, but will have a peak output of 4kW (5.4bhp) which is sustainable for short periods of time.

This kind of power output throws it into direct competition with one of its stablemates, the Vespa Primavera 50, which uses a 50cc engine to produce approximately 4bhp at 9,500rpm. However, having an electric motor means instant torque, which Piaggio claims produces a superior performing scooter. As the majority of these scooters will be used to dart between queueing cars in cities, the instant torque will no doubt be appealing to many customers.

What’s more, the Vespa Elettrica’s maximum range is large enough for the majority of commutes, as Vespa guarantees a range of 62 miles for the standard version – real world testing will obviously assess whether the Italian marque is true to its word. But for customers wishing to travel further, there is the X version which comes with a range extender, doubling the maximum range to 124 miles.

Further enticing city goers is the 4-hour charging time, which is done using a cable stored under the seat that plugs straight into the mains. There has been no mention of prices or specifics on when the Elettricas will arrive in the UK, however, every Vespa Elettrica will be manufactured in Pontedera and as mentioned above, world wide distribution will beginning in 2018.

Would you be interested in an electric scooter? Let us know in the comments below...