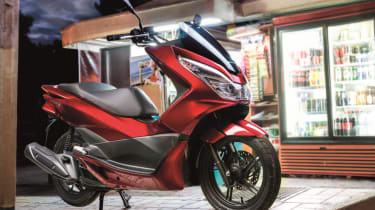 The PCX 125 has been a consistent best-seller for Honda and it has every right to sell well. At just £2,799 on-the-road, the PCX offers great value for money. It’s liquid-cooled, reliable, nippy, well built, stylish and comes with great features. If you’re looking for a commuter scooter to see you through a good few years of hard labour, the Honda is a great choice.

Way back in 2010, the PCX was the first scooter to come with Idling Stop Technology. Combined with its frugal, low-friction, enhanced Smart power (eSP) engine and low-friction tyres, it means the PCX’s claimed 134mpg is achievable in everyday use. It sold heavily all around Europe and is still consistently at the top of the 125 sales charts.

The eSP engine is liquid-cooled and compact – in fact, the PCX was the first scooter to carry a side-mounted radiator, rather than having a bulky radiator to hide inside the legshields. It’s a nippy enough scooter and the Idling Stop technology works seamlessly: it simply cuts the engine when you’re at a standstill and starts back up again as soon as you twist the throttle.

As on all automatic scooters, you just twist and go for near-instant power. It’s the same when it comes to stopping: Honda has always been a leader in technology and the company’s braking is second to none. The PCX was ahead of the crowd with linked brakes and they do work very well. There’s no ABS on the PCX yet, but the scooter doesn’t suffer as a result. Why add unnecessary costs to the machine if it already works well? 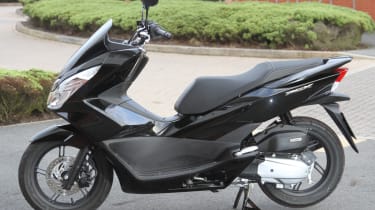 The scooter accelerates well enough to beat most traffic from a standing start. Even with the split-second delay as the Idling Stop kicks back in (you can manually turn that feature off if you prefer), you’ll still keep ahead of most commuters.

The scooter easily gets to 60mph and you can expect to see close to 70 on the clock – a liquid-cooled scooter makes better use of its power than a similar air-cooled machine. The feet-forward riding style of the PCX also means it seemingly glides around corners and the suspension is better than on many 125s.

Honda claims 134mpg from the PCX and, if you’re careful with the right wrist, you can get very close to that. Even if you ride hard, you’ll still achieve over 100mpg, and a full tank will last the average rider around 200 miles. If you’re trying to budget, Honda is now offering fixed-price service plans on its motorcycles and scooters, and a service plan for the PCX costs £375 for the first three services. The first service is at 600 miles, then at six-monthly intervals. All Honda motorcycles come with a two-year manufacturer’s warranty and reliability is something they’re famous for.

The PCX is a conservative-looking – okay, it’s not overly pretty, but it’s not ugly, either – and practical machine. The styling is Japanese sleek, rather than European ‘in-yer-face’, so it’s a commuter-focussed scooter, rather than a magnet for thieves: it can blend into a parking bay without attracting the attention of any undesirables. Like all modern scooters, the PCX has good weather protection and plenty of storage space beneath the seat.

Add an optional top box and you can virtually double the storage capacity to make it even more practical. The PCX was launched in 2009 and originally built in Honda’s Taiwanese factory, before production moved to Vietnam in 2013, hence keeping the cost down to competitive levels. Quality is still worthy of a Honda badge, though, and there’s nothing much to worry about, other than the usual rusting of the standard mild-steel exhaust and the odd fastener.