Cyan Racing, the motorsport arm of Volvo, has created a restomod of the classic P1800 Coupe. It mixes the style of one of the Swedish brand’s most iconic models, now 60 years old, with state of the art competition materials and tech.

The structure of the P1800 is a heavily reworked version of the original; starting with a 1964 model, Cyan Racing identified weak points in the structure and reinforced them through a mix of high strength steel and carbon fibre. The latter is bonded to the steel chassis in order to add further rigidity. Meanwhile, the wheel arches were widened to accommodate a larger track front and rear - a result of bespoke suspension.

Many of the P1800’s most distinctive design details remain; the front grille, chrome bumpers and are all instantly recognisable from the original. However, the window line has changed subtly in order to increase its strength, the front bumper and bonnet gain extra cooling vents, and the rear features a single centre-exit exhaust.

Fully adjustable all round, the front suspension features a double wishbone setup with two-way dampers and aluminium uprights, while the back replaces the original car’s live axle with a fully independent setup. Hiding behind 18-inch forged wheels are a set of 362mm brake discs gripped by four pot calipers.

The P1800’s original engine is ditched altogether. It’s replaced with a 2.0-litre turbocharged four cylinder unit derived from the Cyan Racing S60 TC1 which competed in the World Touring Car Championship. It produces 414bhp, but despite the turbocharged configuration, Cyan says that it’s tuned to deliver a linear power band; as evidenced by the fact that the car’s peak torque of 455Nm is produced at 6,000rpm and its red line at 7,700rpm. 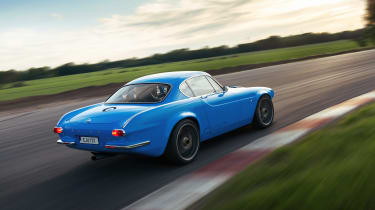 To maintain a spiritual link to the original, the P1800 Cyan uses a bespoke five speed manual gearbox by motorsport transmission experts Holinger, and drive is sent to the rear wheels through a limited slip differential.

Performance figures have yet to be confirmed, but that 414bhp has just 990kg to move, so expect full supercar-levels of speed.

Cyan Racing will build the car to each individual customer’s specifications. Prices have been confirmed at $500,000 - that’s roughly £375,000.