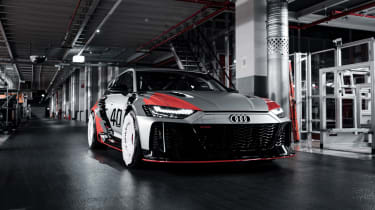 Audi has taken a leaf out of Skoda’s book by giving its apprentices a chance to test their skills and develop a purpose-built project. This one-off RS6 is the fruit of their labour – and it marks 40 years of Quattro while commemorating the firm’s legendary 90 Quattro IMSA-GTO.

The student team behind the RS6 GTO Concept were heavily influenced by the 90 Quattro IMSA-GTO – a 710bhp 2.2-litre five-cylinder racer, which was designed to compete in the American Trans-Am series throughout the late 80s and early 90s.

Like the racer, the RS6 GTO features an aggressive aero package, flared wheel arches, a side-exit exhaust and a large rear spoiler. There’s even a similar white, black and red livery, which is finished with the number “40” in honour of Quattro’s ruby anniversary.

The concept’s exterior makeover is finished with a set of subtly tweaked LED lights, a new vented bonnet and some “GTO” badges. The apprentices also designed a fresh set of Quattro-branded centre-lock wheels, which are a modern interpretation of the monoblock race wheels fitted to the IMSA-GTO.

Audi’s apprentice team also overhauled the RS6’s cabin. They started by junking the car’s carpets, sound deadening and rear seats – then they fitted a six-point roll-cage, carbon fibre race seats, window netting and racing harnesses. However, the standard estate’s centre console appears to have survived the chop shop, as has its Alcantara steering wheel.

We’re yet to receive any official information about the RS6 GTO’s powertrain – but, given it’s based on the RS6 Avant, it’ll likely feature a tuned version of that car’s twin-turbocharged 4.0-litre V8 engine. Even before any fettling by the students, the unit generates 592bhp and 800Nm of torque, which is enough to propel the standard car from 0–62mph in 3.6 seconds.

What do you make of the Audi RS6 GTO Concept? Let us know in the comments section below… 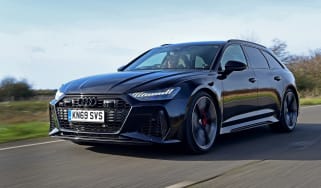