The new 592bhp Audi RS 6 Avant manages to blend supercar performance with acres of practically, so is it the perfect all-rounder?

The RS6 Avant’s talent lies in how it combines blistering pace, superb refinement and silky comfort, masses of practicality and lots of tech and kit in one package that’s so desirable on many fronts. It’s not the sharpest or most dynamic super estate, but as one car to cover many bases, which these machines have to, it’s difficult to look past Audi’s fastest load-lugger.

When it comes to super saloons and estates, the arms race between the German manufacturers has moved away from chasing ludicrous power outputs and more towards tech – and there’s no better example of this than the new Audi RS 6 Avant. We’ve driven it for the first time in the UK to see just how that tech copes with our roads.

Of course, there’s still more power with this new, fourth-generation car – 592bhp to be precise, but it’s a smaller jump on from its predecessor than other generational steps in the RS 6 Avant’s lineage.

There’s also 800Nm of torque from the 4.0-litre twin-turbo V8, and the engine is one area where much of the development has centred on. It now has 48-volt mild-hybrid tech to help boost efficiency, even if a claim of 22.6mpg is quite thirsty. Still, the stop-start system can be activated at up to 13mph, while the car can also coast engine-off between 34-99mph. This 48-volt set-up also brings active roll control. 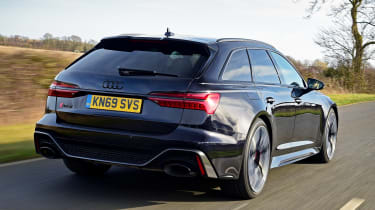 While there’s no doubt that this helps usability, it’s the engine that still dominates the package. It’s so flexible. With that huge peak torque figure available from just 2,050rpm the RS 6 delivers its acceleration in an easy, effortless lope. There’s minimal turbo lag, so response is good, too. The engine will rev out, with maximum power produced at 6,000rpm, but there’s so much low down that it feels less eager at high revs. The engine note also sounds more synthesised – the RS 6 sounds best burbling in the mid-range with the £1,450 optional sports exhaust fitted to our test car.

Traction is great thanks to quattro four-wheel drive, which helps cut the 0-62mph sprint to just 3.6 seconds, while all RS 6s feature a sport differential on the rear axle for torque vectoring to help improve agility. There’s also rear-wheel steering to boost how quickly the RS 6 turns, and it’s easy to get to grips with.

The steering is light in Comfort mode but artificially weighty, squidgy and resistive in Dynamic, so we prefer the middle mode you can choose when setting your pre-sets with the new RS driving mode feature. Regardless of your choice, there’s not a lot of feel, although there is plenty of grip.

You also get adaptive air suspension as standard, but on optional 22-inch alloys the ride comfort was mixed. It copes with rolling roads and softer bumps, but harsher inputs highlight inconsistencies in the setup and the RS6 sometimes crashes, sometimes wallows, sometimes controls movement well and sometimes lumbers over the road.

We also tried the £1,300 RS Plus steel spring set-up with adaptive dampers, which is much better. The car feels better tied down with tauter, more reactive body control, yet the dampers also better absorb inputs, improving ride comfort.

In comfort the Audi feels surprisingly supple given how big the wheels are. It moves with a relaxed, fluid and smooth motion to the damping, not ironing out bumps but tracking over the majority of them relatively serenely. 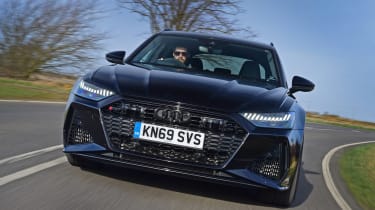 This is partly where its usability comes from. Other elements that add to that include the 565-litre boot with powered tailgate, while the back seats are extremely spacious. The level of standard kit is also brilliant, as you’d hope given the £92,750 price tag.

Cabin quality is great and all the kit is well integrated, but if there’s one criticism, it’s that it’s similar to a standard A6 – the RS 6 doesn’t feel as special as some rivals inside.