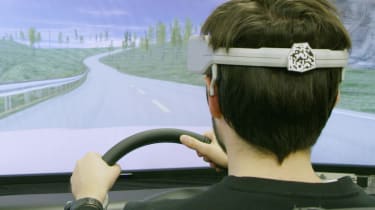 Nissan has unveiled extensive research in to what it calls Brain-to-Vehicle technology, which will be showcased at the upcoming Consumer Electronics Show in Las Vegas on 9 January.

The Japanese marque, under its Nissan Intelligent Mobility branding, aims to harness the driver’s brain wave activity and mate it to onboard autonomous systems in order to improve the car’s reactions in real-life driving scenarios. It’s the result of almost seven years of research, conducted with assistance from École Polytechnique Fédérale de Lausanne in Switzerland.

The Brain-to-Vehicle technology requires the driver to wear a brain wave measuring device to determine his/her thought process. If the driver detects a scenario that requires the car to brake, accelerate or turn the steering wheel, the system can send the brain signals to the car.

According to Nissan, the technology can step in and react 0.2-0.5 seconds quicker than the driver can, improving performance when the car is under human control.

The system is also said to detect the driver’s mood and alter the driving configuration in a moment, to suit the driver’s needs. The vehicle’s autonomous driving system uses the brain wave measurements too, to best match itself to the driver’s driving style.

Nissan is attempting to humanise autonomous driving technology by implementing Brain-to-Vehicle technology into its fleet. Nissan’s Executive Vice President Daniele Schillaci said: “When most people think about autonomous driving, they have a very impersonal vision of the future, where humans relinquish control to the machines. Yet B2V technology does the opposite, by using signals from their own brain to make the drive even more exciting and enjoyable.”

Do you like the sound of Nissan’s brain-to-vehicle technology? Tell us what you think below...