Nissan has unveiled the 370Zki and Armada Snow Patrol concepts ahead of the Chicago Motor Show, both aimed at tackling snowy terrain 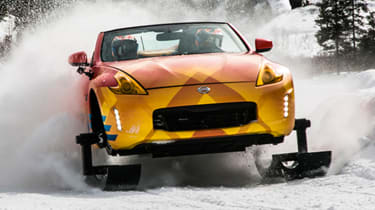 Nissan has treated us to two snow-themed special edition vehicles, based on the 370Z roadster and Armada SUV respectively. The Nissan 370Zki and Armada Snow Patrol are pitched as the ultimate cars in which to tackle the harsh winter conditions typically found in the Rocky Mountains or other winter sports hotspots around the globe. Both are making their debuts at the 2018 Chicago Motor Show.

Aside from the striking livery, the 370Zki has done away with wheels and instead features large skis and military-style Dominator tracks. It also comes with the 370Z’s 3.7-litre V6 pumping out 324bhp, along with a 7-speed automatic transmission.

The entire drivetrain had to be removed and redesigned in order to fit the upgraded parts, but curiously the front brake discs and calipers have retained, despite the skis rendering them useless. Most of the other modifications were made necessary to fit the giant tracks and skis, including custom mountings for the suspension and three-inch spacers to attach the tracks to the wheel hubs.

While the 370Zki required bespoke fabrication, the Armada Snow Patrol has been customised using parts that owners of the Nissan Armada (the successor to the Nissan Patrol that isn’t sold in the UK) can go and buy off the shelf. To start with, the body received a 3-inch hike thanks to a Pro Comp lift kit and massive 35-inch MT2 maximum traction tyres (again from Pro Comp). The huge MT2s wrap around 20-inch satin black Cognito Series wheels, giving the car a purposeful look.

Powering the off road SUV is a 5.6-litre V8 producing around 370bhp and mated to a seven-speed automatic transmission, helping it claim a maximum towing capacity of 3.9 tonnes.

As a snowy expedition will likely need a little more firepower in the lighting department, Nissan has included two new light bars. A DR36 with flood and spot functions for the roof and a smaller, 5-inch unit on the bumper. The bumper itself has been enhanced, or rather swapped for a heavy duty unit from Smittybilt, which benefits from an XRC unit with 5.4 tonnes of pulling power. 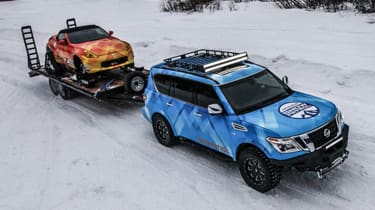 Currently, there is just one 370Zki and it’s likely to stay that way. However, as the Armada Snow Patrol has been upgraded using shop bought parts, it is not unrealistic to think that private individuals in the US could will recreate the look.

Thinking of a mountain road trip? Then read out top tips for driving in the snow.