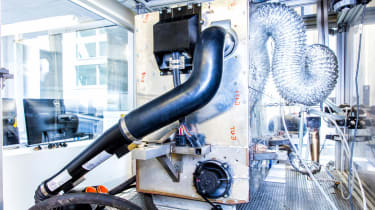 Nissan has unveiled plans for the world’s first ever bio-ethanol fuel cell car, which mixes ethanol and natural gas with oxygen to produce electricity – directly powering the front wheels.

The fuel – either 100 per cent ethanol or ethanol-blended water – passes through a reformer, creating hydrogen to generate electricity via a solid oxide fuel cell (SOFC). This then charges the batteries and motor, creating rotational power transmitted to the wheels.

Bio-ethanol fuels, including those sourced from sugarcane and corn, are widely available in North and South America, as well as parts of Asia. European infrastructure is still in its infancy, so such a system is unlikely to reach UK showrooms any time soon.

That said, Nissan has assured us it will continue its pursuit of a zero-emission society by “openly addressing the infrastructure issues tied to energy supply in every region of the world”. 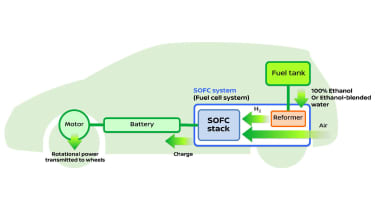 The e-Bio setup is said to be more efficient than a conventional fuel cell due to the fact its system generates electricity through a solid oxide fuel cell (SOFC) power generator. Nissan says this should give the production car a range of more than 600km (373 miles).

Nissan claims the e-Bio fuel cell is totally carbon neutral, also insisting running costs will be on a par with today’s pure EVs. Bosses suggest the new fuel-cell setup will be an ideal fit for the public and businesses alike thanks to the short refuelling time and ample power figures.

There’s no word on which car might be the first to get Nissan’s e-Bio fuel cell stack. Given that the Nissan Leaf was designed from the outset as a dedicated EV, the first e-Bio model is likely to be a standalone model in its own right.

Would a bio-ethanol fuel cell car be a success? Let us know in the comments section below...