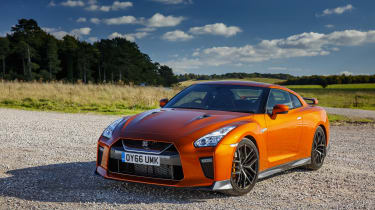 Nissan made changes to the GT-R most years, so the newer the car, the faster and more developed it is. But you won’t feel short-changed by the original 473bhp model, with its stellar performance (193mph, 0-62mph in 3.8 seconds). Many of these cars have been driven on track and/or tuned to as much as 800bhp, but if maintained properly reliability is rarely an issue. Road tax, tyres, fuel, insurance and maintenance can be costly, but when you look at what you’re getting for your money, the Nissan still represents something of a bargain.

Next year will mark half a century since the launch of the Skyline GT-R, which Nissan introduced in 1969 with a 2.0-litre straight-six engine powering the rear wheels. By the time the third-generation model appeared in 1989, the R32 GT-R featured a 2.6-litre twin-turbo engine and four-wheel drive – a formula that continued with the next two generations (R33 and R34).

These seminal supercars blended huge performance with straightforward tuning and impressive reliability – all of which came as standard with the R35 GT-R (no longer a Skyline) that made its debut in 2007 and reached the UK two years later. The earliest GT-Rs are now a decade old and worth £35,000, but should you buy one? 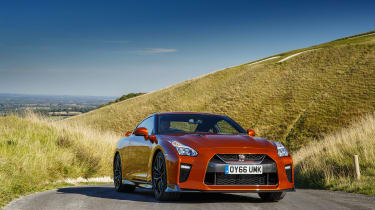 Order books opened in April 2008, but the first GT-Rs weren’t delivered until March 2009, by which point the power had increased from 473bhp to 478bhp.

At the end of 2009 the infotainment was improved, while the transmission software and the suspension were recalibrated. For 2011 the power was upped to 523bhp and the gearbox software tweaked further; 2012 model-year cars got even more power (now 542bhp), and a Track Pack edition arrived with no rear seats, retuned suspension and beefed-up brakes. 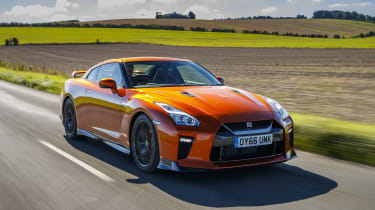 The Recaro edition from 2012 brought improved sports seats; for 2015 there was a Prestige trim with ‘touring’ seats.

For 2017 the entry-level GT-R was called the Pure; above this were the Recaro and Prestige. The GT-R Nismo is astonishingly capable, but it makes little sense when the regular car is so good.

Standard equipment has changed over the years, but even the earliest cars have xenon lights, sat-nav, dual-zone climate control, leather and tyre pressure monitoring. All GT-Rs feature a six-speed dual-clutch automatic transmission.

Alternatives to the Nissan GT-R

THE 997-generation Porsche 911 Turbo offers similar levels of performance, build quality and usability to the GT-R, and it also comes with four-wheel drive to help get the power down. There’s a choice of manual or auto boxes and a convertible if you fancy it as well. All of these things are similarly true of the V8-powered Audi R8, which unlike the Porsche and Nissan has two seats only.

On paper the GT-R is up against the Vauxhall Monaro VXR with its 6.0-litre V8, but this feels rather unsophisticated next to the Nissan. You could also consider a BMW M5, Audi RS 6 or Mercedes-AMG E 63 which are all great to drive, very quick and beautifully built.

Look for leaking dampers on early GT-Rs. Cracks around the brake discs’ drilled holes point to track use.

ABS pumps fail, given away by a warning light. New ones cost £1,200, plus two hours’ fitting.

ECUs can be quizzed to see how a GT-R has been driven, including how many times the launch control has been used. 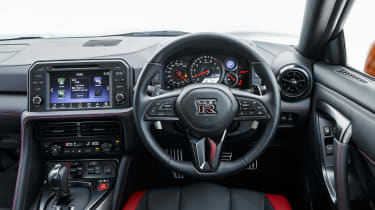 Although the GT-R is billed as a four-seater, it’s really more of a 2+2. The rear seats (which are fixed) are best viewed as extra luggage space to go with a boot that has a pretty reasonable 315-litre capacity.Up front, the Nissan’s cabin is well equipped as standard, but some of the materials in early cars were downmarket; newer models are much better. 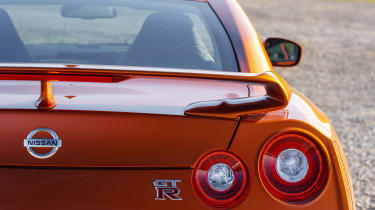 So far, the GT-R has had three recalls. The first was in 2010 for possible faulty steering-column locks; 1,548 cars were affected. Brake wear sensor glitches saw 106 models recalled in 2012. Then in 2017, a total of 501 cars were called back, having left the factory without a required certification label stitched into the headlining.

The GT-R is too rare to have made it into our new or used Driver Power satisfaction surveys, but there are 45 owner reviews on our sister site carbuyer.co.uk, most of which are glowing. Owners buy with their eyes open, so they know about the high running costs, yet are often still wowed by the performance, reliability and usability.