Our resident hero, Steve Sutcliffe, gets to grips with a nitrous-powered, 1,390bhp, world record-holding Nissan GT-R

A month or two back the car you are looking set a new world record for high speed drifting. On a smooth, extremely wide runway in Dubai, with a Japanese gentleman called Masato Kawabata at the wheel, this highly modified, half-a-million-pound Nissan GT-R travelled for some 50 metres going completely sideways – at a measured angle of over 30 degrees from dead ahead – at an average speed of just over 190mph. Which, you will surely agree, is utterly and heroically insane.

What is arguably even more ridiculous, however, is that Nissan has allowed a small selection of fruitcake car journalists to drive this most extraordinary of GT-Rs. Not only that, they also allowed us to drift it down a runway, not at quite the same speed as Kawabata-san did in Dubai, true, but still at sufficient lick to at least get a gist of what that record run might have felt like. And the answer, somewhat amazingly, is; nowhere near as mad or mind boggling as you would think.

And that’s purely because the modifications carried out to this unique GT-R have been executed with one very simple goal in mind; to make it as easy to drift as it is humanly possible to be. So despite the fact that it has 1390bhp and over 1400nm courtesy of its 4.0-litre twin-turbo, nitrous injected engine, and is rear rather than the normal four wheel-drive, it’s actually quite a friendly thing to drive. With deliberately soft responses to its steering and suspension, and, most of all, from its OS Superlock rear differential. 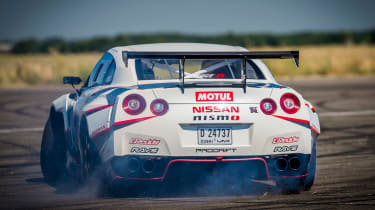 Even the rear tyres have been reduced in size and, therefore, grip to enable the thing to go as sideways as possible, as easily as possible. And as for the extra steering lock that’s been engineered into the rack, think forklift truck and you might get a vague idea of how far you can turn the wheel before you reach the lock-stops; at 100mph plus this, they say, is a crucial element in the world of high speed drifting.

Before I get my turn at the wheel I’m taken for a demonstration run by Darren McNamara, a likeable chap from Ireland who gets paid to melt rubber and watch the world go by out of the side window. And believe me, Darren is very good at what he does.

• Ken Block's Gymkhana videos: everything you need to know

Amid a cacophony of wheel spin, tyre smoke, engine noise and exhaust howl, we leave the line and head off down the runway, mostly but never completely in a straight line. There is wheel spin – and therefore major sideways-ness – in first, second, third, fourth, fifth and eventually even in sixth gear. Especially in sixth gear, in fact. 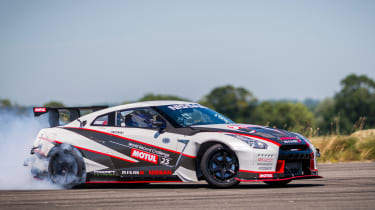 We snake gently from one direction to the next, all the way down the runway, opposite lock applied by Darren, massive wheel spin supplied by GT-R. And by the end we are doing about 140mph, still completely crossed up.

From the passenger seat it feels ridiculous, with the cabin so full of smoke that I have absolutely no idea which way is which. So we come to a halt with the doors wide open to let the smoke out, and Darren gestures fro me to have a go.

I strap myself in, select first in the sequential gearbox, using the surprisingly light clutch “because it’s kinder on the car if you do.” And then, boom, we’re away. Except the expected sensation of acceleration never arrives; instead the GT-R just sits there bonfiring its rear tyres, going almost nowhere. Into second and, same thing. Into third and, same thing. Only once in fifth is there anything approaching some traction, and that disappears the moment the revs hit 3600rpm and the nitrous goes berserk, alongside the rear tyres. 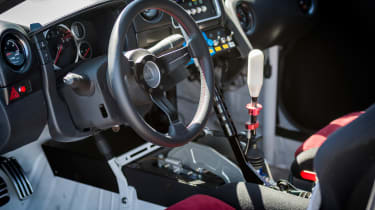 Even so, I eventually get into sixth and, at about 110-ish, manage to get the GT-R reasonably well crossed up. And the thing that strikes me above all else is; it’s just so weirdly smooth and calm and, yes, damn it, easy to control. While going sideways at three figure speeds. Which, of course, is precisely what it was built to do, even with a numpty like me behind the wheel.

So it turns out to be just a lovely thing to drive, does the 1390bhp, rear drive, nitrous injected GT-R. True, a little later Darren did do something a touch more scary in it – by drifting it within no more than 15 feet of the assembled crowd, with me in the passenger seat, at somewhere between 135-140mph, again with a cabin so full of smoke that neither of us could see where on earth we were going. But then that’s what professional drifting is all about; and if you’re not living this close to the edge, then you are taking up too much room…