Small convertibles mean large sales volumes these days, but it hasn't always been that way. It was only four years ago that Peugeot's 206 CC arrived on the scene with its Mercedes SLK-style electric folding roof 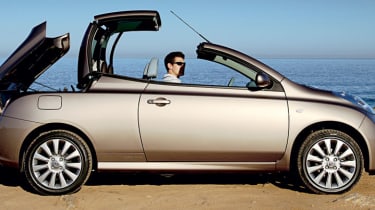 Any drop-top supermini needs something special if it's arriving four years after the 206 CC, and the Micra has: a folding glass roof that gives the cabin an airy feel. It may not be sporty to drive, but the C+C counters this with decent boot space and a comfortable ride. Factor in some keen prices, and you've got a very impressive small convertible.

Small convertibles mean large sales volumes these days, but it hasn't always been that way. It was only four years ago that Peugeot's 206 CC arrived on the scene with its Mercedes SLK-style electric folding roof. An instant hit, nearly 9,000 found homes in 2004, making it the UK's favourite cabrio.

Peugeot's success hasn't gone unnoticed. Eager to attract the same buyers, Nissan is launching its Micra C+C next month. Aimed at the Vauxhall Tigra, the Sunderland-built car was created with the help of drop-top expert Karmann.

The result is a glass-panelled roof that's a masterpiece of design and engineering. Raising or lowering it takes 22 seconds, and requires nothing more than a press of a button. Unlike in the 206 CC, there are no fiddly catches to worry about.

With a long, steeply raked windscreen, the roof is short. But there's 116mm of extra body length, so boot capacity is a class-leading 255 litres when the top is down. With it up, it's 457 litres - and there's also stowage space under the front passenger seat.

While the roof itself is impressive, the overall styling is less so, and the C+C suffers from the same boot-heavy appearance that plagues many coup