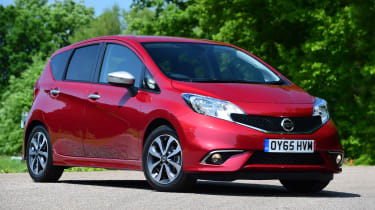 The second-generation Nissan Note wasn’t a game-changer, although it did introduce a series of safety features to the segment. It’s neatly designed and, as long as you avoid entry-level cars, equipment levels are generous. The Note is popular mainly with private and Motability buyers, so there are lots of low-mileage examples around. Read the owner reviews on our sister website Carbuyer and you’ll see some people regret buying a specific derivative due to engine or gearbox characteristics. So while we can recommend the Note, it’s very important that you buy the right spec for your needs to ensure you’re not to be disappointed with the Nissan.

When Nissan teamed up with Renault to create the original Note and Modus/Grand Modus respectively, only the Japanese car enjoyed sales success.

Neatly designed, brilliantly practical and generally reliable, the Mk1 Note was a decent small car that still makes a lot of sense to anybody on a budget looking for a cheap car with low running costs.

So when the second version arrived, expectations were high, and we weren’t disappointed. Looking more stylish and featuring a raft of hi-tech kit, the Note Mk2 was a big advance over the first car.

Now available only as a used buy, does this Nissan strike the right note? 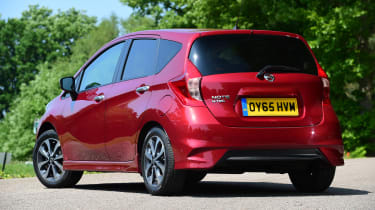 The second-generation Note hit UK roads in October 2013 with either diesel or petrol engines. The former was Nissan’s 89bhp 1.5 dCi unit, while the latter was offered in 79bhp naturally aspirated or 97bhp DIG-S (supercharged) guises. The DIG-S didn’t arrive until spring 2014, bringing with it the option of a CVT automatic gearbox, dubbed XTronic.

The limited-run Note N-TEC appeared in February 2015, based on the Acenta and fitted with NissanConnect, DAB, a touchscreen display with integrated nav and a reversing camera. At the same time, the exterior design got a light refresh.

In July 2016 the limited Black Edition arrived; this was based on the Acenta.

Consider only the DIG-S or dCi engines; the 1.2 is too underpowered unless you never escape the city. The diesel engine is economical, but refinement is poor. 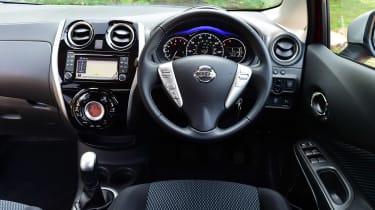 Range-topping Tekna spec has 16-inch rims, part-leather seats and keyless go. All DIG-S cars have a sportier steering and suspension set-up. The Around View Monitor, a 360-degree camera, is worth having; it was optional on the Acenta Premium and standard on the Tekna.

Alternatives to the Nissan Note Mk2

The Note’s closest rivals include the Kia Venga, Hyundai ix20 and Vauxhall Meriva, with the latter being the easiest to find. Only consider the Mk2 Meriva (launched in 2010) with its rear-hinged back doors; it’s spacious, versatile and generally well equipped. Used prices are keen.

The Venga and ix20 are closely related, but both are easy to recommend if rather unexciting choices, because they come with long warranties, so you can expect decent reliability.

Don’t overlook the Honda Jazz, either; this car offers unrivalled space and versatility in the supermini segment, along with class-leading reliability – plus it’s available in hybrid form.

Automatic lights and wipers can behave erratically; some owners often leave them on manual.

CVT gearbox is best avoided thanks to poor fuel economy and a clunky action, especially on hills.

All Notes come with a tyre repair kit rather than a spare wheel, but a space-saver can be accommodated.

The Note’s cabin is impressive for its space and versatility, but disappointing because some of the plastics are of poor quality. Also, the steering wheel adjusts only for height and there’s no height adjustment for the driver’s seat on entry-level cars. When the rear seats are slid back, the boot can stow 325 litres, or 1,495 litres with the bench folded. 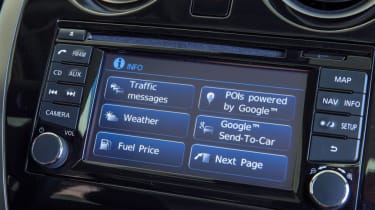 The Mk2 Note has been recalled three times. In August 2015, cars built up to March 2014 had a starter button that could remain engaged once the engine was running. 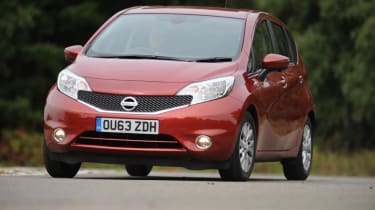 Failure of ignition coils led to a campaign in February 2016 for cars made from July 2015 to January 2016. The most recent came in December 2016 and affected some Notes produced in April 2016 because of an ABS fault.

The Note didn’t rank in our Driver Power 2018 survey, but it finished 66th in last year’s poll. That’s a disappointing result, although it isn’t surprising going by some of the owner reviews on the Carbuyer website. Low running costs are the key attractions, with ride and handling plus the engine and gearbox being criticised.