Although the Nissan Note isn’t the most youthful supermini-MPV on the market, it still offers practicality, style and value 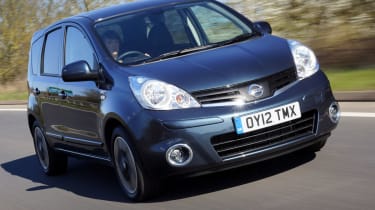 The Nissan Note first arrived in 2006 and changed the game in the supermini-MPV class. Since it was introduced, manufacturers all over the world have copied the format, reaping sales from a previously unknown niche. The baby Nissan offers a greater degree of practicality over a basic hatchback, but manages to be just as easy to drive, both in and out of town. Bold styling, a practical load area and buckets of innovative touches make the Note an attractive buy.

Given the purpose of the Nissan Note, it's actually a joy to drive. In town it is easy to park, thanks to light steering and bulging headlamps that indicate exactly where each corner lies. On the open road the feedback through the wheel has a bit more weight, and the car feels reassuring at motorway speeds. The Note first appeared in 2006, and aside from a light facelift in 2010, it remains largely the same car today – which is pleasantly surprising when you consider how capable it is next to newer rivals like the Kia Venga and Toyota Verso S.

Compact dimensions and lightweight materials help the Nissan Note when it comes to efficiency and running costs. It's a full 200kg lighter than the Kia Venga, meaning the like-for-like diesel motor manages almost 5mpg more than the Korean – 67.3mpg for the Note vs 62.8mpg for the Venga. This is especially impressive when you consider it is quicker from 0-62mph and cheaper to buy in the first place. However, the Kia does come with a seven-year warranty, compared to the Nissan’s three. This is particularly painful when you realise to get basic kit like air-conditioning you’ll need to upgrade to a mid-spec model.

For a supermini-MPV the Nissan Note stands out from the crowd with bold styling and high levels of standard kit. The Nissan is well proportioned and does well to disguise its van-like shape with body coloured bumpers and a set of boomerang rear light clusters. Mid and top spec models are well equipped – the flagship n-tec+ model gets 16-inch, two-tone alloy wheels, chrome foglight surrounds and body coloured mirrors. Inside the dash is simple but well designed, but is let down slightly by the over-use of hard plastics, which can make the Note feel cheap in places.

The Nissan Note excels when it comes to practicality. In the boot there is plenty of removable storage, including a false boot floor, meaning you can transport fragile items without fear of them being crushed by heavy shopping bags. And although the boot is smaller than in rivals, offering just 280 litres compared to the Vauxhall Meriva’s 397 litres, it is a useful shape and the rear seats fold flat with very little effort whatsoever. Up front, the cabin is positively cavernous, with cubbyholes dotted around the dash. The glovebox is huge, and the door bins are generous, too. Thanks to the van-like proportions, the Note is also extremely easy to drive – it has a large glass area, which makes visibility great and parking a doddle.

Disappointingly, electronic stability control isn’t even an option on the Note until you get to the mid-spec cars, which feels a bit stingy when you consider it’s standard on the Toyota Verso S and Kia Venga ranges. Front, side and curtain airbags are standard, but the Note only scored a four-star crash test rating in its 2006 Euro NCAP test - new cars such as the Kia Venga and Vauxhall Meriva scored five-stars in an even tougher test. The Note placed a respectable 45th in the 2012 Driver Power survey, proving drivers are largely satisfied with the ownership experience.