We get behind the wheel of the all-new Nissan Note, ahead of its arrival on UK roads this October 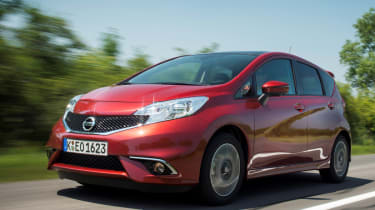 The Nissan Note remains as practical as ever but now there’s a little more emotional appeal as part of the package, thanks to the improved handling and refreshed design. When it comes to carrying lots of bags and passengers, the Note excels with seriously surprising rear legroom and a boot that’s as flexible as it is spacious. The Polo may still win in the luxury stakes, and the Fiesta still wins out for fun, but the Note’s grown-up dynamics, impressive tech list and value price-tag allow it a worthy position among the top supermini contenders.

The old Nissan Note was a bit of an outsider in the supermini class, with more of a focus on practicality than style and handling. But Nissan wants this all-new Note to be more of a traditional supermini, better suited to battling the big-selling Ford Fiesta.

That all starts with the way it looks, and the new Note is quite a departure from the old car. It’s more angular and less dumpy, featuring a bold grille and a sharp crease in the bodywork on each side – something Nissan calls a ‘squash line’.

Here we’re driving the 1.5-litre dCi diesel, which is a little too noisy under acceleration but relatively hushed at idle and on the motorway. Its 0-62mph time of 11.9 second may not be especially impressive but it’s punchier than you might expect, and willing to pull from low revs, too.

Nissan has made a concerted effort to inject a bit more sportiness in to the Note – it’s not aiming at the Fiesta, though, just at the VW Polo. The result is exactly what you’d expect, with a little more composure in the bends than the old model. The steering is a little too light and the brake pedal needs a bit more feel, but the Note now feels like a sure-footed and very capable car.

If you go for the DIG-S model, you get a Ride and Handling package thrown in, which tweaks the suspension and steering for a more involving drive. It’ll also mean a slightly firmer ride, but you’ll only notice it if you step out of one car without the package into one with it.

Even on our standard car, Nissan has firmed up the ride compared with the old Note. While that means it doesn’t float over big bumps like it used to, it also means it’s much quicker to settle down after hitting a ridge in the road. Put simply, ride comfort sits somewhere between the supple Polo and the sporty Fiesta.

The Note’s cabin has been vastly improved over the old car in terms of design and a slight premium feeling. The dials looks classy and the centre console is now finished in gloss black, although the dashboard is still made of a hard, scratchy plastic. It’s still an incredibly practical car, though, with a 325-litre boot available with the floor in its lowest setting.

There’s more to it than that, though, because on mid-spec Acenta models and above you can slide the rear seat bench forwards to increase boot space to 411 litres – 31 litres more than a Golf. There’s definitely as much rear legroom as a Golf, and Nissan even claims there’s as much as a Ford Mondeo. It’s easy to believe, with two six-footers sat behind each other with around seven inches of kneeroom to spare, and plenty of headroom, too.

Nissan is aware that buyers in this class also demand technology, so the Note is available with keyless-go, a new 5.9-inch sat-nav, a 360-degree camera system called Around View Monitor and Safety Shield. This incorporates lane departure warning, moving object detection and blind spot monitoring in to one simple camera.

The final piece of the supermini puzzle is value for money, with the Note’s £11,900 starting price cheaper than the five-door Fiesta’s £12,095. What’s more, the Note Acenta Premium costs from £14,150, including sat-nav, 15-inch alloys, automatic lights and wipers, Bluetooth and rear electric windows.