We haven't seen such impressive use of space since the Honda Jazz. But is Nissan's latest offering worthy of Note? 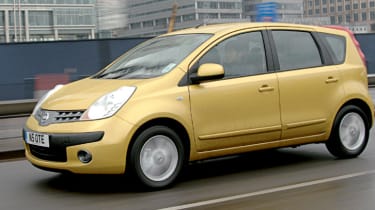 It does not fit into any specific market segment, but the Note has such a wide range of abilities it can take on superminis, conventional hatches and MPVs - and win. Not since the launch of the Honda Jazz have we seen such impressive use of cabin space. Only the lack of pace from the entry-level engine detracts from this top-class family package.

The bigger a car is on the outside, the more spacious it is on the inside. It stands to reason... or does it? It used to be that large cars were the roomiest, but designers have got smart, shrink-wrapping practical cabins with space-efficient bodies.

King of the logic-defying hatches is Honda's Jazz, which has been tough to beat since its launch in 2001. However, Nissan has been readying its own musically named contender. We grabbed the keys to one of the first new Notes to arrive in the UK to see if it's in tune with the needs of its customers.

Slotting the Note into conventional new car classes is impossible. It shares its platform with the Micra as well as Renault's latest Clio and Modus, but it has dimensions all of its own. It's shorter but has a longer wheelbase than a VW Golf, and there's a much lower roofline than on a conventional MPV.

The distinctive design will divide opinion, but the Note's shape only makes real sense when you climb into the back. A sliding bench means rear passengers have lots of legroom and sit comfortably with bags of space.

Lift the tailgate and the boot initially looks cramped, until you pull out the removable false floor which reveals another deep section. The panels are even reversible, with a wipe-clean surface on one side. Unfortunately, it's the driver that suffers the only ergonomic flaw. With no reach adjustment on the steering, it's difficult to get the optimum position behind the wheel. Thankfully, the rest of the dashboard is sensibly laid out and well built.

On the move, the Note continues to impress. The Nissan feels nimble and agile nipping in and out of city traffic, although at higher speeds there's no shortage of body roll, while the direct steering is a little light. Our car was powered by the entry-level 1.4-litre petrol engine. With only 87bhp, it has to be worked hard for swift progress, but it's a relatively free-revving unit. Combined economy of 44.8mpg and low CO2 emissions of 150g/km will be compensation enough for most.

The standard fit five-speed manual gearbox has a similar notchy feel to the Micra. Instead of giving the Note a meaty shift, engineers have concentrated on making all the controls easy to use.

Prices that start from a competitive £9,995 - with the diesel available from £10,995 - will also keep budget- conscious buyers happy. If you are shopping for a top-value family hatchback, the latest addition to the Nissan range is definitely worthy of Note.